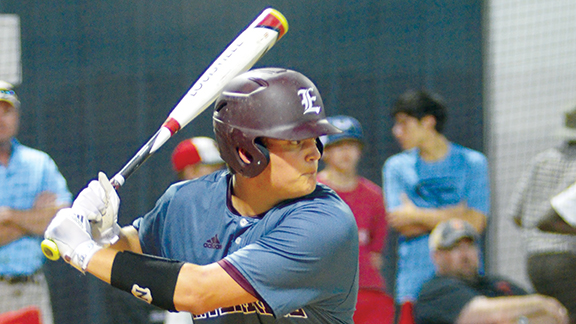 Landon Gartman of Enterprise steps into his swing in a game earlier this season. (Photo by Dylan Rubino)

The Enterprise Yellow Jackets picked up two important district wins on senior night Thursday, winning game one against Prentiss 11-0 and game two by a score of 15-0.

The wins move Enterprise to 16-9 overall on the season and 11-4 in district play with the playoffs coming up next week.

“I am very happy with winning two district games tonight,” Enterprise head coach Cass Brister said. “We hit it really well, got good pitching and played defense well. I am very proud of our guys and it made it more special that it was senior night.”

Freshman pitcher Austin Fugler dominated game one for the Yellow Jackets, pitching the complete five innings, giving up no runs on no hits, no walks and 13 strikeouts.

It was more of the same in game two as the Yellow Jackets completed the sweep on senior night and cruised to the 15-0 victory.

Gartman got the start in game two for Enterprise and pitched the complete three innings, giving up no runs on one hit, no walks and seven strikeouts. Seven players recorded a hit for Enterprise on the night.

Seniors Jeffery Daniels, Austin Carter and Reese Brocato finished the game with two RBIs each, capping off their senior night on a high note. Gartman, senior Marvin Butler, senior Cade Cangemi, senior Brady Williams and senior Trevor Freeman each had one RBI to round out the scoring total in game two.

Enterprise will face South Jones Tuesday before the playoffs start next Friday when they host Union.