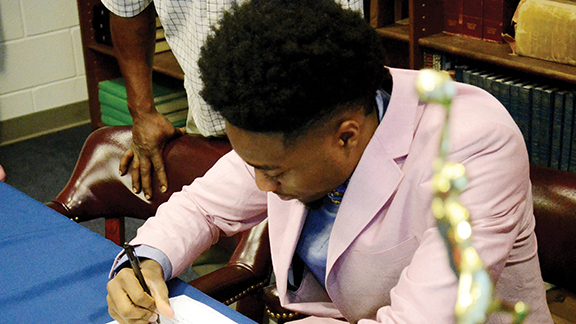 As a senior leader and a relentless scorer, Brookhaven senior guard Damarius Brooks led the Panthers to new heights during the 2016-17 basketball season.

Brookhaven won their district title against rival Provine and advanced to the 5A state quarterfinals in Jackson with a 21-6 overall record and a 6-2 record in district play.

Brooks averaged 21 points, five rebounds and four assists per game during his senior campaign. For his efforts, Brooks has been named The Daily Leader All-Area MVP.

“Damarius has an unbelievable work ethic and he has achievable goals. He studies the game and is always working toward a way to get better,” Brookhaven head coach Jimmie Butler said. “A player is expected to improve on each level of the game that he plays. There is no limit to how good he is going to be.”

Brooks averaged 13 points per game his junior year and bumped his scoring average up this past season, making major improvements to his offensive game to lead the Panthers. Brooks is a dribble-drive type of player that can create his own shot and get to the lane when needed against any opponent.

Improving his outside shot and offensive repertoire off the dribble was key for Brooks coming into this past season and the hard work paid off.

“This past season, he was able to shoot off screens and pull up off the dribble whenever he wanted,” Butler said. “Damarius made it hard for other teams to defend us. He was able to make the outside shots and get to the basket whenever he wanted. That allowed us to stretch the defense which was the foundation of our offense.”

Not only was his offensive skill set a main reason for the Panthers’ success, but his leadership on and off court helped mold the younger players on the team and helped them become better players as well.

“Other players admired him for the person he is and his work ethic on and off the court,” Butler said. “He is a mild-mannered kid that is a leader in the classroom and on the court. Every player wanted to be a guard like Damarius.”

Back in March, Brooks signed his letter of intent to play basketball at Copiah-Lincoln Community College, where he’ll join former Brookhaven teammates Darrian Wilson and Lazorian McNulty on the hardwood for one more season. It was an opportunity he couldn’t pass up.

“Co-Lin in my opinion signed the best guard in the state,” Butler said. “He can play on the ball or off the ball, which makes him a dual threat. Their offense is similar to ours so he should transition well into their system. I believe that he will one day play on the Division I level.”

The opportunity is there for Brooks to reach his goals and make a difference on and off the court at Co-Lin. The drive and determination can one day make his dreams become a reality.

“I plan on going to a higher level playing basketball in college,” Brooks said. “After that, hopefully the NBA.”