Ward 5 incumbent will keep his seat

From where Fletcher Grice is sitting, he could be looking at a whole new board.

Grice, an incumbent running for the Brookhaven Ward 5 alderman seat, is the only sure thing on the ballot. He’s unopposed for the position and can rest easy through the primary elections May 2 and the general election June 6. He expects to be elected to his second four-year term with no problem.

Brookhaven, based on its population of  12,513, according to the 2010 Census, is divided into six wards with an alderman-at-large as well. Mayor and aldermen are considered full-time jobs. Aldermen are paid an annual salary of $18,447.36.

If no one gets 50 percent of the vote plus one in the primary election, there will be a runoff election, which will be May 16.

If there is a runoff, voters must stick with whatever party they voted in the primary.

The general election will include the party primary winners and any independent candidates.

Today we look at the candidate running for Ward 5.

The municipal race could see incumbents return for mayor, Ward 3 alderman, alderman-at-large and police chief, but the other races will be filled with new faces.

Ward 1 Alderman Randy Belcher is running for police chief instead of seeking re-election. The only two candidates, Dorsey Cameron and Elisa Corley Jr., are both running as Democrats.

Grice, 60, turned in his written intent to run as a Republican for the Ward 5 seat on Jan. 3, the first day of qualifying. He never saw a challenger.

He lives in the 100 block of Jaci Drive with his wife, Wanda. They have four children and seven grandchildren.

A graduate of Bogue Chitto High School and Copiah-Lincoln Community College, Grice is retired from General Motors. He is active with Lincoln County Habitat for Humanity and is a member of Easthaven Baptist Church.

Grice, who has lived in Brookhaven for 37 years, wants to see it grow into a model city. “I pledge to help Brookhaven prosper in all areas of city development including financial development, new business, safety including police and fire and infrastructure improvements. I would encourage unity of our city so that Brookhaven residents would be proud to call Brookhaven home,” he said.

He believes that can only be accomplished by working as a team. “I plan to build relationships with the entire city board including the mayor and all aldermen,” he said. “I will treat everyone with respect and listen to all concerns. I will honor the laws of our city and will always be honest and fair and submissive to the rule of law.”

Grice said he is excited to serve another four years so that he can continue to work on improving the city’s infrastructure. He said he’s proud that during his tenure the city was able to drop its fire safety rating to a 5 and that Brookhaven received grant money for a new fire station. “I would like to see continued efforts to improve our infrastructure,” he said. 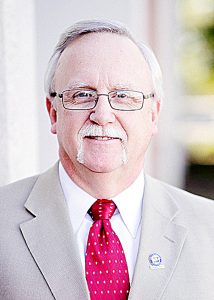 Law enforcement officers are looking for the driver of a vehicle that struck and killed a Pascagoula man Saturday morning... read more