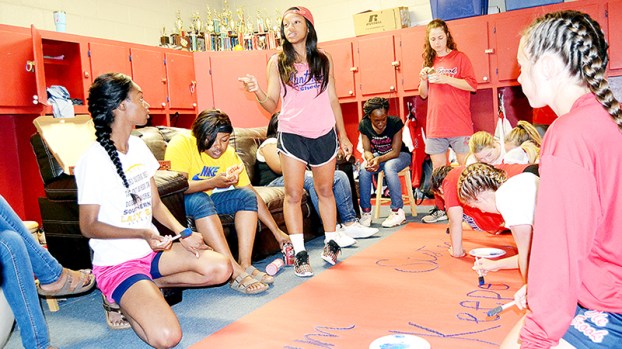 Photo by Donna Campbell/Tia Busby, in cap, tells a story about teammate Brittney Hill Monday as members of the Lady Panthers’ softball team make banners to hang at Brookhaven High School today in memory of Hill. The 18-year-old BHS junior died Friday in a two-car collision. The softball team has asked the community to wear red today for Rockin’ the Red for BB Day.

‘She was bold and beautiful’; teammates remember Hill

That’s the motto of the Ole Brook Lady Panthers. It’s also what’s painted in blue on a red banner the team plans to hang up today at Brookhaven High School where the student body, teachers and staff will be wearing red in memory of junior Brittney Hill. Hill died Friday night in a two-vehicle accident.

The 18-year-old was on her way to the Panther prom at the Brookhaven Building.

Her team gathered in the softball locker room Monday afternoon to make posters and prepare for their game against West Lincoln. Rain took away their chance to play the Lady Bears and postponed a balloon release they’d planned in honor of Hill. They’ll release the balloons before their home game Thursday night, which is also Senior Night.

“She was one of a kind for sure,” said teammate Maddie Thompson, a junior. “Her smile. She could turn your whole day around just by saying one word to you.”

Hill covered the outfield for Ole Brook, settling in with her glove at whatever position her coach put her in.

Butler said Hill was an encouraging cheerleader for the team, always spreading her good attitude to the other players.

“She was the one person who was always up, making up a new cheer,” said senior Macy Ziskin.

Senior Jada Henderson said she didn’t know that BB got her nickname because her younger sister couldn’t say Brittney. She believed it stood for something else.

“She was bold and beautiful,” Henderson said.

Hill was killed in a two-vehicle collision as she drove back to Brookhaven to meet her boyfriend, Zarian Harper, a senior at BHS. The two were going to the prom and she’d been at her mother’s house to get her hair and makeup done for the event.

The other driver, 45-year-old Robert Brown of Brookhaven, was taken by air ambulance to University of Mississippi Medical Center in Jackson, where he was listed in good condition Saturday.

Brown was traveling east on Zetus Road in a 2003 Dodge truck. Hill was headed west in a 2007 Nissan Sentra. Neither had passengers with them.

Rushing said the crash remains under investigation. The Mississippi Highway Patrol will assist with a reconstruction of the collision.

Hill, the daughter of Shanika Hill of the Zetus community and Brian Thomas of Wesson, lived with her grandmother, Mae Butler, in Brookhaven so she could go to Ole Brook. She ran track last year, but loved softball, her mother said. She played fast-pitch and slow-pitch.

Visitation is set for Friday from 1 to 5 p.m. at Williams Mortuary in Brookhaven and from 6 to 7 p.m. for family hour at Cornerstone Church of God in Christ.

Funeral services will be Saturday at 11 a.m. at Alexander Junior High with burial at Siloam Missionary Baptist Church Cemetery.

The Lady Panthers have been asked to wear their jerseys and be the flower bearers at the funeral, head coach Mandy Vinson said.

BHS Principal David Martin said counselors will be available at the school today to talk to students.

Vinson said the tragedy has bonded the team together. “Of course, it’s been really emotional for everybody. They’ve held on to each other,” she said. “They just want to be together and support each other.”

She said the team got together after the prom, meeting in the locker room to remember Hill. Some teammates who have graduated returned for the impromptu memorial.

“They laughed together, telling stories and BB, and cried together,” Vinson said.

The game Monday night against West Lincoln was to be dedicated to Hill, who played for the Lady Bears before she moved to Brookhaven.

This Army veteran is keeping a secret

Randall Smith has been working on something, but he’s keeping it a secret. At least until Thursday at 5:30 p.m.... read more