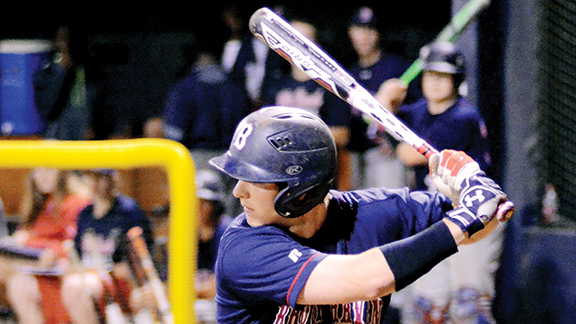 Penn Wilson of Brookhaven (23) steps to the plate in a game played recently. The senior went 2-for-3 with two homers and four RBIs in their road win over Columbia Tuesday night. (Photo by Dylan Rubino)

The Ole Brook Panthers finished the regular season on a high note Tuesday night with a road win at Columbia by a score of 8-3.

The win ends the regular season for Brookhaven with an overall record of 20-7 and with a perfect 9-0 record in district play.

The Columbia Wildcats end the regular season with a 9-15 overall record.

Senior Penn Wilson picked up the win on the mound for Brookhaven, pitching four innings and giving up one run (none earned) on no hits, three walks and seven strikeouts on the night. Seniors Tate Walley and Dalton Fortado came on in relief for Wilson. Walley pitched two shutout innings, giving up no runs and no hits, with one walk and four strikeouts. Fortado pitched one inning, giving up two earned runs on two hits, two walks and one strikeout.

Wilson also had a big game at the plate, going 2-for-3 with two home runs and a team-high four RBIs on the night. Sophomore Jacob Porter followed up going 1-for-3 with two RBIs in the game. Juniors Logan Emfinger and Tyler Mixon each had one RBI as well.

By winning their district, the Panthers earned a first round bye in the playoffs. They’ll face the winner of Long Beach and Picayune in the second round of the 5A state playoffs on April 28 at 7 p.m.