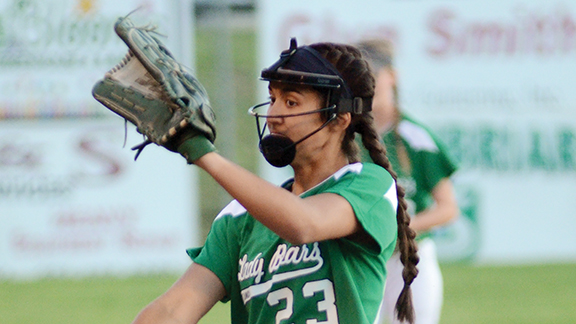 Megan Gerald of West Lincoln (23) fires a pitch in their 11-1 win over Wesson Tuesday night. Gerald pitched the complete game and only gave up one run. (Photo by Dylan Rubino)

Despite both teams getting runners on base early, the game remained scoreless until the bottom of the third. With the bases loaded, Makennah Redd got the Lady Bears on the board with an RBI single to give them the 1-0 lead. The Lady Cobras got out of the jam without the inning getting out of hand, as timely outs at home plate and a fielders’ choice got them out of the inning without any more harm.

Megan Gerald picked up the win for the Lady Bears pitching the complete game and took command on the mound from the very first pitch. Laynee Crapps took the loss for the Lady Cobras.

“I thought the girls played about as good as they could play today. I’m proud of the girls and the way they performed tonight,” Lady Bears coach Andrew Redd said. “This game was a great way to end the regular season on a high note. The game was definitely a boost as we get ready for the playoffs.”

The Lady Bears will host Puckett for game one in the first round of the 2A state playoffs Thursday night at 6 p.m. Game two and game three, if needed, will be in Puckett Friday and Saturday, respectively. With Wesson winning their district, they’ll have a first round bye in the playoffs and will face the winner of Perry Central and Choctaw County in the next round of the 3A state playoffs.

Below are the most current reports on fishing conditions of lakes in the area. Information is courtesy of The Mississippi... read more