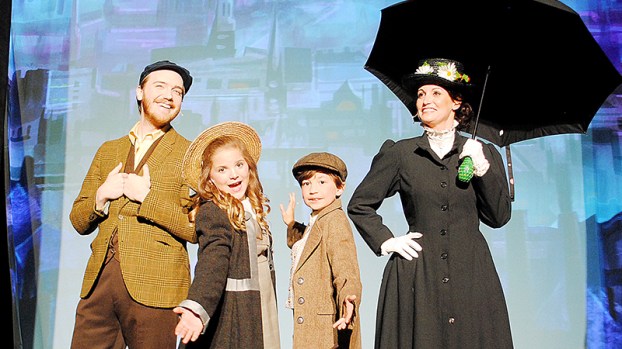 Photo by Donna Campbell/Members of the cast of “Mary Poppins” rehearse Wednesday at the Haven. Pictured are, from left: Logan Cap, Evelyn Waterloo, Hayes Gabler and Wendi Case.

The cast of the Brookhaven Little Theatre will need to sing only one word to turn the audience into a cheery, head-bouncing lot.

Those 14 syllables mean what the actors in the BLT production of “Mary Poppins” hope the reviews will be: extraordinarily good and wonderful.

Based on the books by P.L. Travers and the classic Disney film, the BLT cast will share their take on the story of a practically perfect nanny during six public performances starting Friday at 7:30 p.m.

The first Sunday matinee will be followed by a meet-and-greet tea at the Brookhaven-Lincoln County Chamber of Commerce’s upstairs banquet hall. Cost of the “Jolly Holiday Character Experience and Tea Party” is $10.

“It was just one of those musicals we all felt like we had a history with,” she said. “We knew it would be a show that Brookhaven would embrace and felt like we were ready to take on something this big and challenging.”

It will be a full-length Broadway-style musical, Waterloo said. “And it is wonderful,” she added. “Full of energy.”

“Mary Poppins” will be BLT’s first production in the Haven Theatre since the historic building received a facelift. BLT used donations from the Save the Haven campaign to make a few needed changes. They’ve built out the stage a bit, added a wheelchair ramp with access to the stage and included another emergency exit in the 300-seat auditorium. They’ve also added stage curtains which will allow the crew to change sets between scenes unseen.

“We wanted to make our theatre experience for our patrons more professional and higher quality,” she said.

BLT also used donations to purchase a digital scene projector for the backdrop. Digital backdrop software can be leased for performances and eliminates the countless hours of construction and painting. It’s also allows for a more visually-pleasing experience for the audience.

“We’ve got some surprises in store with our special effects,” Waterloo said. “There are lots of interactive, magical moments in the shows.”

Tickets are limited for the six performances. “It’s looking like it’s going to be a sellout,” she said.

Purchase tickets online at haventheatre.org or call 601-990-2243. Limited tickets may be available at the door.

The policy set by the Lincoln County School Board that allows individuals to speak during an open meeting is a... read more