J.W. Morgan, one of the city’s first black aldermen, will be laid to rest today

John “J.W.” Morgan made history and smiles in his 86 years.

Services for Morgan, one of the first black members of the Brookhaven Board of Aldermen, are today at 1 p.m. at St. Paul Missionary Baptist Church with burial at Carver Heights Cemetery.

Morgan, 86, died Saturday at his residence.

He was a member of St. Paul his entire life, serving as a Sunday school superintendent, deacon and church treasurer. He received the Lifetime Membership and Dedicated Service award from St. Paul in 2013.

Morgan was a 1950 graduate of Alexander High School, finishing as president of his class. He was one of the first black men in Mississippi to obtain a license as a radio announcer, said his wife, Mary.

He started as an announcer for WCHJ in 1952 and was a host of “Spiritual Time” until 2004. That’s when a teenage Mary first fell in love with his voice. It would be decades later before she fell in love with the man, too.

In between spinning records and delivering bank documents, Morgan served the city he loved. He was elected alderman in 1977 and served for 20 years. During that time he became the city’s first black mayor pro tem when he filled in for the late Doug Sullivan.

During his career, he served on the Brookhaven Housing Authority, the Alexander Jr. High PTA — he was president — the Brookhaven-Lincoln County Chamber of Commerce, Masonic Keystone #73, Kiwanis Breakfast Club, the NAACP, and the Board of Directors of the United Givers Fund.

In 2005, North Third Street was renamed JW Morgan Way, a place he’d lived his whole life. He died there, too.

He served as grand marshal for the Dr. Martin L. King Parade in 2013, was inducted into the Alexander High School Legacy Hall of Honor in 2014, and was the 2015 O Foundation VIP.

He and Mary started courting after he walked through Wal-Mart while she was working. She stopped him to ask about renting some of his land. Even though he was 35 years her senior, they married. May 2 would have been their eighth anniversary.

She’s proud of her husband’s accomplishments though he didn’t talk about them much. “He was very humble,” she said. “It wasn’t nothing that he  bragged about. He just loved Brookhaven.” 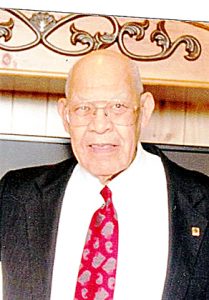 Team sheds tears for Brittney then releases balloons in her memory

Players on the Brookhaven Lady Panthers’ softball team cry for their teammate, Brittney Hill, who died on Good Friday on... read more