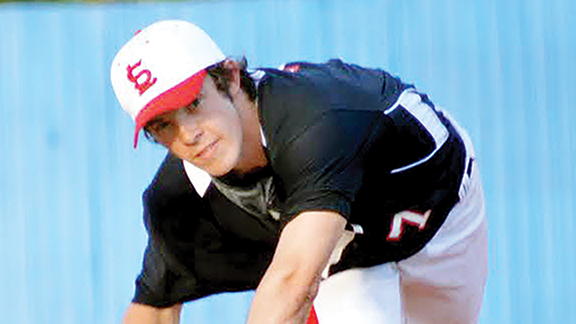 Parker Flowers of Loyd Star throws a pitch in their road playoff win over Bay Springs Friday. Flowers got the start and pitched the first inning Friday. (Photo by Lydia King)

The Loyd Star Hornets had no problems in their first round 2A playoffs matchup with Bay Springs, making quick work of the Bulldogs by winning game one 12-0 and winning game two Friday night 19-3.

“It’s good to win in the first round in two games and get our pitching staff some rest,” Loyd Star head coach Jared Britt said. “I was proud of our bats hitting well today, but we need to clean up our defensive miscues. Now we need to start preparing mentally and physically for our next opponent.”

The Hornets continued their strong performance from their opening win Thursday and kept the bats going Friday, totaling 11 hits and 19 runs to beat Bay Springs in only three innings.

Loyd Star jumped out early, scoring six runs in the top of the first to take a 6-0 lead. Bay Springs got on the board in the bottom of the first with two runs of their own to cut the deficit to 6-2.

Loyd Star exploded in the top of the second and responded by tacking on eight runs to extend their lead to 14-2 and put the game out of reach.

The Hornets added five insurance runs in the top of the third and ended the game in three innings 19-3, advancing to the next round of the playoffs.

Senior Parker Flowers got the start for Loyd Star and only pitched the first inning, giving up two earned runs on two hits, four walks and one strikeout. Sophomore Dane Smith came on in relief and pitched the final two innings, giving up one run (none earned) on one hit, no walks and striking out four.

Smith also had a big day at the plate, going 2-for-2 with a team-high four RBIs on the night. Junior catcher Tucker Watts continues to swing a hot bat for the Hornets, as he went 3-for-3 at the plate with three RBIs, including two doubles on the night. Senior Bradyn Brister also had three RBIs for Loyd Star on two hits. Senior Konner Allen and sophomore James Beard each had two RBIs.

Loyd Star will host the winner of Mize and Lake on Friday in the second round of the 2A state playoffs.

Bogue Chitto cruises through first round against McAdams

The Bogue Chitto Bobcats hosted McAdams in the first round of the 1A state playoffs and won both games easily... read more