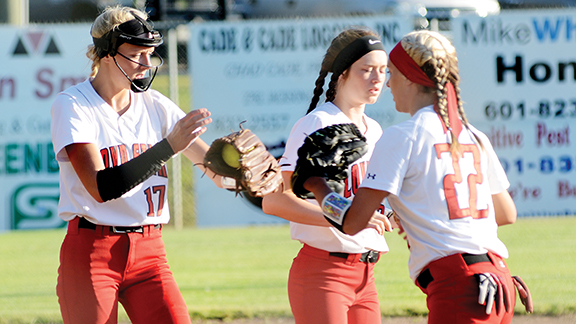 The Loyd Star Lady Hornets celebrate after a big strikeout in their loss to Taylorsville Tuesday night. Picture are, from left: Makenzie Smith, Megan Poole and Shelby Smith. (Photo by Dylan Rubino)

The Loyd Star Lady Hornets knew they had a tough task in facing the defending 2A state champions Taylorsville in the second round of the playoffs.

Taylorsville came into the game Tuesday night on a mission and used a stellar pitching performance from Lauren Stringer to shut out the Lady Hornets 3-0.

“Their pitcher is really good and we knew if we couldn’t hit her first pitch strikes, she’s going to come back and kill us,” Loyd Star head coach Jan Delaughter said. “We knew it and we practiced it, but we didn’t do what we practiced.”

Stringer was in complete control from the opening pitch. She finished the game pitching all seven innings, giving up no runs on one hit, one walk and 12 strikeouts.

Senior Makenzie Smith was just as good on the mound for Loyd Star, but Taylorsville came up big at the plate in clutch moments to take home the win. Smith pitched all seven innings, giving up three runs (two earned) on six hits, five walks and 11 strikeouts.

Stringer got the Tartars on the board first in the top of the third with an RBI single to left field and gave Taylorsville the 1-0 lead. Smith came up big for the Lady Hornets after the hit, striking out the next two batters to stop the damage.

Loyd Star threatened in the bottom of the fourth with runners on second and third, but Stringer struck the next two batters out to end the threat.

Taylorsville added a run in the top of the sixth on an RBI single from Kelli Norris to make it 2-0. Stringer capped off her huge night with an RBI double to center field to make it 3-0 Taylorsville.

Shelby Smith had the lone hit on the night for Loyd Star in the top of the seventh, but they couldn’t bring her home as the Lady Hornets dropped game one.

Loyd Star had their chances to make a run in the game, but the pitching was too strong from Taylorsville and the Lady Hornets had no answers.

“We have to make less errors in the field and we have to hit the ball better,” Delaughter said. “That’s a very good team we’re facing and it’ll be tough Thursday to win.”