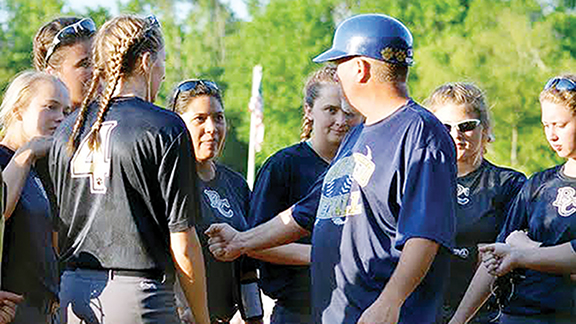 Bogue Chitto head coach Scott Leggett talks to his team in between innings in their 11-1 win over Stringer Tuesday evening. The Lady Cats will host Stringer tonight for game two. If Bogue Chitto wins, they’ll advance to the 2A quarterfinals. (Photo by Stacy Leake)

The Bogue Chitto Lady Cats opened the 1A fastpitch state playoffs Tuesday evening on a high note, dominating Stringer on the road and winning game one 11-1.

The win moves Bogue Chitto one win away from advancing to the quarterfinals of the 1A state playoffs as the series shifts to Bogue Chitto tonight.

“We did a good job scoring runs in all but one inning. We had to adjust a little to their pitching,” Bogue Chitto head coach Scott Leggett said. “Codi (Leggett) pitched well and we played great defense behind her.”

Freshman Codi Leggett pitched a great game for the Lady Cats and kept Stringer in check. She finished the game pitching all seven innings, giving up one earned run on four hits, four walks and striking out 13 batters.

The offense backed up Leggett by putting up 11 runs on 13 hits for Bogue Chitto. The offense scored runs in every inning except the top of the sixth.

Already with a 3-0 lead heading into the top of the third, the Lady Cats extended their lead with four runs in the half inning to take a 7-0 lead and put the game out of reach.

The Red Devils responded with one run in the bottom of third, but it didn’t matter in the end.

Senior Cherie Savoie had a big day at the plate to lead Bogue Chitto. Savoie went 4-for-5 with three RBIs and three runs scored, including a double and three singles. Sophomore Baileigh Jackson had a big game as well, going 2-for-4 with three RBIs. Legget and senior Terrah Nelson each had two RBIs in the playoff opener for Bogue Chitto. Eighth grader Julianna Frazier had one RBI on the night.

Game two will be at Bogue Chitto tonight. If the Lady Cats win, they’ll face the winner of Sebastopol and Nanih Waiya in the 1A quarterfinals. First pitch is set for 5 p.m.

Facing a 2-0 deficit with one last chance at a rally in the top of the seventh, the Brookhaven Lady... read more