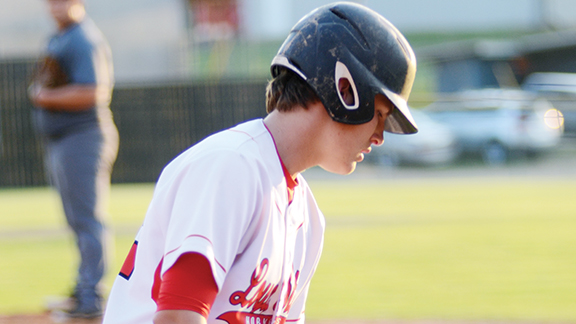 Konner Allen of Loyd Star steps to the plate in a game played recently. Allen was named a MAC all-star, along with teammate Parker Flowers. (Photo by Dylan Rubino)

In the 1A/2A South State team, two Loyd Star seniors — Konner Allen and Parker Flowers — were named as All-Stars. Both Allen and Flowers have been key components to the undefeated Loyd Star Hornets team this season. Allen has been mashing baseballs all season for the Hornets with a .362 batting average with 29 hits, including nine doubles and two home runs.

“I am proud of these two for their accomplishments of making the MAC all-star game,” Loyd Star head coach Jared Britt said. “Their hard work has paid off by being recognized for this.”

Flowers has done his part at the plate as well with a .301 batting average with five doubles, three triples and three home runs on the season. Flowers has also been dominant as a pitcher, owning a 6-0 record with a 2.83 ERA.

Wesson senior Jeremy Smith and Lawrence County seniors Kasey Durr and Marcus Atterberry were named to the 3A/4A All-Star team as well. Smith has been a two-way threat for the Cobras all season long and has won big games on the mound. Smith batted a .385 average with 13 RBIs, including nine doubles, three triples and two home runs. On the mound, Smith owns a 3-4 record as a starter with a 2.50 ERA.

Durr has led the Cougars at the plate with a .420 batting average, 34 hits and 17 RBIs, including 11 doubles and one triple. Durr has also been the ace of the pitching rotation with a 6-1 record and an impressive 0.47 ERA in nine starts.

Atterberry has been the next leading hitter for Lawrence County with a .308 bating average with a team-high 23 RBIs, including four doubles and two home runs.

Fishing stays steady throughout the area