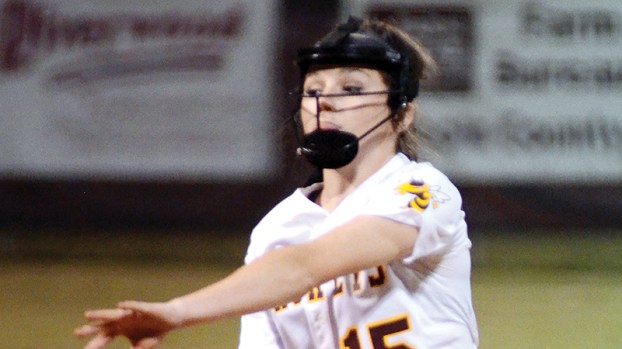 Photo by Dylan Rubino/Haley Nations of Enterprise (15) pitches in their playoff win over Clarkdale Thursday night.

Trailing 1-0 in the series and facing a must win situation, the Enterprise Lady Jackets dominated game one against the Lady Bulldogs, winning 11-1 Thursday.

The Lady Jackets relied on their defense to win game two by a score of 5-2, to advance to the next round of the 2A state playoffs.

The Lady Jackets struck first in the bottom of the first. With two outs, Lauren Gartman belted an RBI double to give them the 1-0 lead. The Lady Bulldogs tied the game in the top of the second with Reanna Chatham hitting an RBI single.

The Lady Jackets got the lead back in the bottom of the third as Gartman hit an RBI sacrifice fly to make it 2-1 Enterprise.

The Lady Jackets added to their lead in the bottom of the fourth by scoring four runs. With one out, Abby Richardson hit a two-run RBI double and Jana Nations followed with an inside the park home run, bringing in two more runs.

With bases loaded in the bottom of the fifth, Haley Nations hit an RBI sacrifice fly. Clarkdale got out of the inning before the Lady Jackets could put more runs on the board. Enterprise put the game away in the sixth inning by scoring four runs.

Haley Nations pitched the entire game and picked up the win for the Lady Jackets. Makayla Roberts took the loss for Clarkdale.

Both pitchers got off to a strong start with both teams scoreless heading to the third inning.

The Lady Jackets then scored to take a 3-0 lead. Gartman belted a three-run home run into right field. Haley Nations kept the Clarkdale off the board until the sixth inning.

Enterprise added two insurance runs in the fifth inning when Gartman hit a two-run RBI double to seal the win at 5-2.

Nations pitched all seven innings, striking out six batters to get the win for Enterprise. Roberts took the loss for the Lady Bulldogs.

“I couldn’t be more proud of a group of young ladies as I am of these girls,” Enterprise head coach Charissa Burke said. “They played with confidence and were able to come out ahead against a great Clarkdale team.”

For his dominating play on the golf course and for leading the Co-Lin Wolves all season long, Brandon Blakney was... read more