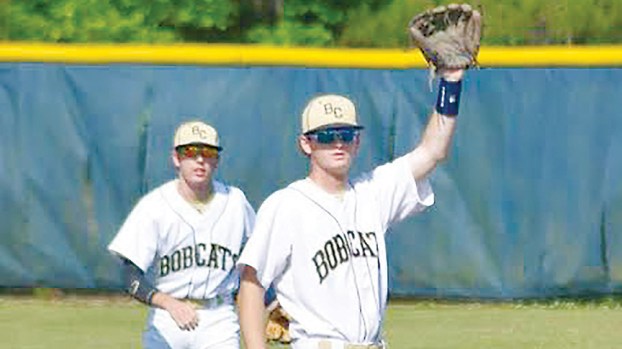 Photo by Stacy Leake/Bobcats Tanner Gunther and Grant Leake wait for the throw to second in their playoff loss to French Camp Friday night. Pictured are, from left: Gunther and Leake.

The Bogue Chitto Bobcats dropped Game 1 of their playoff series against French Camp Friday night in heartbreaking fashion by a score of 6-4.

With both teams going pound for pound, the Panthers got two runs in the top of the 10th to take home the victory.

With the game scoreless after the first inning, the Panthers got a run across the plate in the top of the second. The Bobcats followed up by scoring three runs in the bottom of the second to take the 3-1 lead.

In the top of the third, Seth Box for French Camp sent a ball over the fence with a solo home run to get their inning going. The Panthers added one after that to tie the game at 3-3.

Going into extra innings, the Bobcats loaded the bases with one out in the bottom of the ninth but the French Camp defense came up strong with a double play to end the scoring threat.

The Panthers went into the 10th inning with momentum after the big defensive play in the bottom of the ninth. The Panthers scored two runs to go up 6-4.

The Bobcats started off the bottom of the 10th with a base hit by Tucker Lambert, but nothing after that as French Camp took the win.

Jackets shut out by Bruins

The Enterprise Yellow Jackets ran into 2A power St. Joseph Catholic Friday night on the road and got shut out... read more