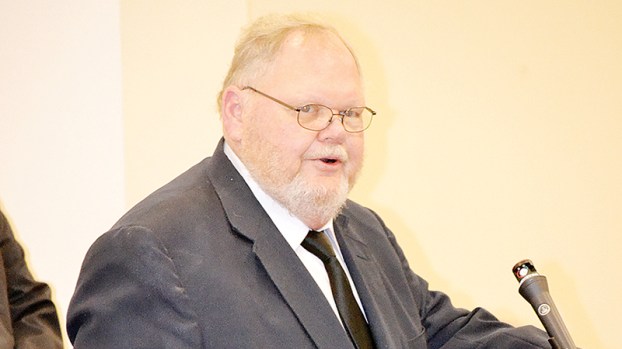 Don Walley isn’t one for accolades and flowery speeches.

That’s why Walley, of Brookhaven, believes it was a blessing that when the Exchange Club of Brookhaven honored him with the annual Golden Deeds award Friday night, he missed all the nice things they had to say about him in the introduction.

Walley was out in the parking lot of the Thames Conference Center at Copiah-Lincoln Community College. He was kicked back in the driver’s seat of his car with his tie off, chilling with the AC on.

When Exchange Club member Ricky Lagrone finished the long introduction and revealed Walley as the winner, the dozens of people in the room looked around to congratulate him but all they saw was his empty seat in the back of the room and his brother, Mike Walley, with an amused grin on his face.

The older Walley had slipped out.

“Mike had to call me on the phone and find me,” Walley said.

Both men have been in the Exchange Club since 2009. They joined about a week apart.

Mike Walley nominated his older brother for the Golden Deeds award earlier this year but didn’t know until Friday night that after culling through dozens of nominations, the committee had chosen Don Walley.

He said his brother deserved to be recognized for the good that he does. “He just does it,” he said. “He said the Lord’s put him there and ‘Whatever it is he wants me to do, that’s what I do.’”

Each year, the winner’s name is kept a secret until it’s announced at the banquet. When Lagrone started the introduction, Walley knew he needed to find his brother.

He called him and then went outside to round him up. “I had to come up with something on the fly to get him back in there,” he said. “He’d done took his tie off and was cooling off in the car.”

Don Walley had to stop and put his tie back on and then rushed through the door to find everyone’s eyes on him.

“I didn’t even know what I was going back in for,” he said.

The club presented him with a bronze plaque and will record the presentation with his own page in the chapter’s Book of Golden Deeds.

The shock of winning the award was still fresh the next day.

“It is certainly humbling,” he said. “I don’t feel like I deserve that. There’s some people I know that’s got that thing and they work hard.”

Walley, who will be 70 later this year, is modest. He works hard, too.

He also chauffeurs folks to doctors’ appointments, hosts students for the Mississippi School of the Arts, and gives financial aid to others “out of his own pockey,” Lagrone said in the introduction.

“When you ask how this person is doing, he’ll say, ‘Far better than I deserve,’” Lagrone said.

“For me, it’s just something that God has laid on my heart. It’s more of a ministry,” he said. “It’s just real, real humbling to me. It’s a real honor to be recognized.”

Mike Walley, of Enterprise, walked away with the John L. Leary Award. It’s one of the highest honors the club can bestow on its members. While the Golden Deed award can go to anyone in the community, the Leary award is specifically for Exchange Club members.

It goes to a member who exemplifies what the Exchange Club service organization is all about.

Mike Walley was surprised to win his award, too. “A lot more people deserve this more than me,” he said.

His award came a few minutes before his brother left to get some air. “When Mike got his I was joking with him, ‘Tell them I’m your brother,’” he said.

Boy Scout Ryan Amic, of Brookhaven, is conducting a shoe drive that began on April 1 and continues through May... read more