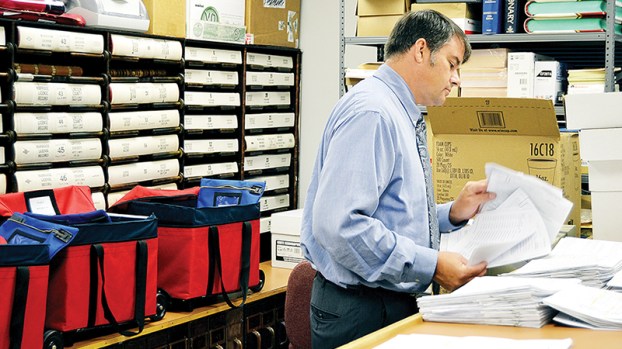 The heads of the municipal Democratic and Republican parties in Brookhaven would like to see everyone get out and vote today.

“We’re encouraging people to come out,” she said. “Some times people feel like it doesn’t make a difference, but it does.”

She said members of the committee have visited churches and gone door to door to get the word out. “We’re hoping for a good turnout,” she said. “I pray that it’s going to be a good turnout and even better in June.”

Another 667 voters are inactive, but could possibly vote affidavit at the polls, he said.

Dennis Valentine, Brookhaven municipal Republican executive committee chairman, will be out early today, making sure everything gets off to a great start. He said Brookhaven City Clerk Mike Jinks, Deputy City Clerk Samantha Melancon and Bairfield have done a great job getting ready for this municipal election.

Valentine wants to pack the polls with Republican voters. “This is a very important election for the City of Brookhaven,” he said. “It’s not the time to stay home and be comfortable.”

The Ward 4 race between Republicans Jason Snider and Rusty Yates will be decided. Alderwoman Shirley Estes did not seek re-election, leaving the seat open to a newcomer.

The same will happen in Ward 1, 2 and 6. Ward 1 Alderman Randy Belcher did not seek re-election so he could run for another office instead. Terry Bates did not run again in Ward 2, nor did David Phillips in Ward 6.

“Ward 4 will be decided today,” Valentine said. “That’s all the more reason to get out and vote.”

At the primaries, if no one gets 50 percent of the vote plus one, there will be a runoff election, which will be May 16. If there is a runoff, voters must stick with whatever party they voted in the primary. The general election is June 6. It will include the party primary winners and any independent candidates.

Voters will cast ballots at the following locations:

Wesson will not have a primary election today because all candidates are running as independents. Voters will cast ballots at June 6 general election.