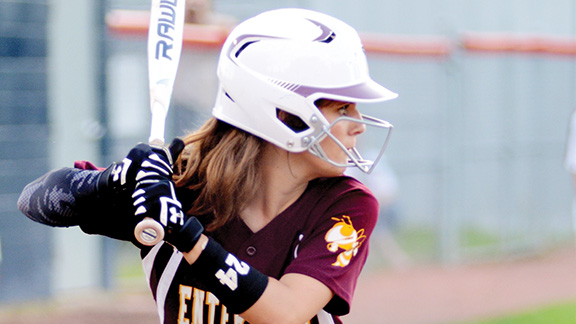 Jana Nations of Enterprise (24) gets ready to swing in a game played recently. (Photo by Dylan Rubino)

The Lady Hornets struck first when senior Madison Culpepper hit an RBI single into center field. Lake scored their second run of the inning on a throw over first base. The Lady Jackets were able to get out of the inning with a key strikeout and a ground out.

Although Enterprise was able to get runners on, Lake was able to strand them, getting the last two batters out on a pop up to the catcher and a strikeout. The Lady Hornets scored the final run of the game in the bottom of the second, on another error by the Lady Jackets.

Both pitchers settled in during the third inning as they pitched scoreless innings the rest of the game. The Lady Jackets were able to get runners on base for most of the game, but the Lady Hornets made sure no runs came across, relying on ground balls and strikeouts to get out of each inning. Enterprise also prevented Lake from scoring again, with ground ball outs and strikeouts.

“We cannot make errors and expect to win against a good team like Lake,” said Enterprise coach Charissa Burke. “The girls will need to regroup to win two games at Lake. Haley Nations pitched a good game for us, but we didn’t play defense behind her.”

Enterprise will travel to Lake Wednesday for game two, and if needed a game three. First pitch is set for 6 p.m.

Wesson knocked out of state playoffs

The Wesson Cobras ran into 3A power St. Andrews Episcopal in the second round of the 3A state playoffs over... read more