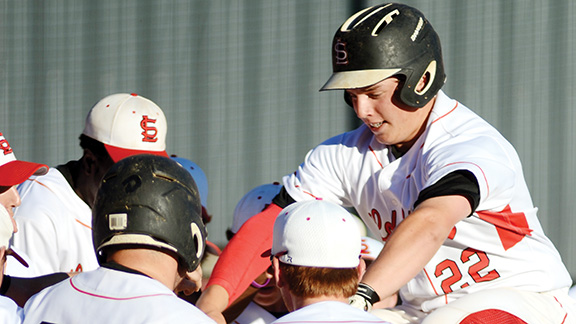 Junior Tucker Watts of Loyd Star (22) jumps to home plate after hitting a home run in their 6-4 win over Lake Monday. (Photo by Dylan Rubino)

With a gutsy pitching performance by freshman Tanner Watts and an explosive second inning on offense, the Loyd Star Hornets extended their season Monday night and took down Lake in game three by a score of 6-4.

The win advances the Hornets to the 2A state quarterfinals, where they’ll face Richton for a trip to the South State finals, a place where Loyd Star reached last season.

Trailing 2-0 after the first inning, Loyd Star exploded for six runs in the bottom of the second to advance in the playoffs.

“This game and this series showed me how much character and how much guts my guys have,” Loyd Star head coach Jared Britt said. “For them to have their backs against the wall and to come out to beat them like we did, to bring it home and win a close ballgame like that, it just speaks volume to their character and guts.”

The gutsiest performance of the night came from Watts on the mound, who pitched all seven innings and gave up four runs (two earned) on the night. Watts bounced back after a couple of tough innings and bounced back in a big way, giving the Hornets confidence the rest of the game.

“Tanner Watts is very gritty,” Britt said. “The moment didn’t get too big for him. He did a good job of staying ahead in the count and filling the zone up. He made them hit the ball. For a freshman to come in and perform in this type of atmosphere like he did, that speaks volume for his game.”

Watts was backed up by a powerful offense that came to life in the bottom of the second inning and gave the freshman all the run support he needed.

Junior catcher Tucker Watts got the scoring started for Loyd Star by launching a solo homer to deep right-center to make it 2-1 Lake.

A bunt single by Tanner Watts and an errant throw to third base scored two more runs to give the Hornets the 3-2 lead. Junior Cade Hodges followed with a two-RBI double to make it 5-2 and senior Konner Allen hit an RBI single to center to give Loyd Star the 6-2 lead.

“We got one good hit in the second. Tucker Watts had that home run on the first pitch in the second inning,” Britt said. “That kind of sparked our guys and they got their confidence from him. To hit a ball that far and hard got our mindset right.”

Errors in the field allowed Lake to score runs in the top of the fifth and sixth innings, but the deficit was too much as the Hornets took home the series victory.

The first game of the 2A quarterfinals series against Richton will be at Loyd Star Thursday night. The start time is to be determined.