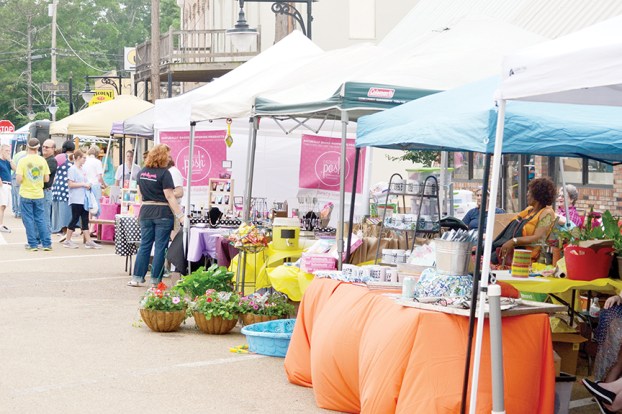 Photo by Brett Campbell/Shoppers browse the wares available at vendor booths along Hwy. 51 in downtown Wesson during the Wesson Founders’ Day celebration Saturday.

From the hot dog eating contest to the final fireworks show, Wesson Founders’ Day was a major success, organizers said.

With celebrations starting Friday night and running all day Saturday, the streets of downtown Wesson were filled with music, games, and families celebrating the town’s 153rd birthday.

The event was an official bicentennial project funded by the Mississippi Humanities Council and the Mississippi Development Authority. It was held in conjunction with the state’s 200th birthday celebration.

“We applied for the Mississippi Bicentennial grant, and we were very happy to receive $4,000,” said Deemie Letchfield with the Wesson Chamber of Commerce.

Wesson Town Hall hosted historical artifacts, along with a fourth grade Mississippi steamboat projects from the students of Wesson Attendance Center. Wesson High school students got to join in on the fun by participating in a Mississippi History poster contest.

On Saturday, longtime television meteorologist Walt Grayson was the grand marshal at the parade. The day’s events included performances from the Co-Lin Drumline and Sojourners. One of the day’s most entertaining events was the hot dog eating contest, which was won by Austin Smith. He wolfed down five dogs in two minutes to win the prize.

“The night ended with a huge fireworks display. It was a great day in downtown Wesson,” Deemie said.

The garbage man came calling at the Lincoln County Board of Supervisors’ meeting Monday and picked up some good news.... read more