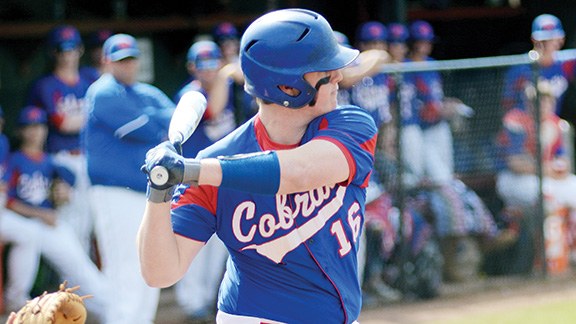 Jimmy McQuage of Wesson (16) steps into his swing in a game played recently. (Photo by Dylan Rubino)

Wesson knocked out of state playoffs

The Wesson Cobras ran into 3A power St. Andrews Episcopal in the second round of the 3A state playoffs over the weekend and couldn’t beat the Saints, dropping game one Friday 8-4 and game two on Saturday 10-7.

The loss knocks the Cobras out of the 2A state playoffs and ends the 2017 baseball season. Wesson finished the season with a 14-16 overall record and an impressive 9-1 record in district play.

The Cobras will look very different next season with nine seniors graduating and moving on from the program, including Jeremy Smith, Jimmy McQuage, Will Hulon, Preston Middleton, Alex Mooney and Peyton Burns.

The Cobras hit the road Friday night to take on St. Andrews Episcopal for game one.

Wesson got on the board first in the top of the first to take a 1-0 lead. Middleton hit an RBI groundout to score senior Jeremy Smith from third to take the lead.

The Saints bounced back quickly in the bottom of the first with five runs, including a two-run homer from C.J. Carron. St. Andrews took a 5-1 lead after the first inning.

A single from McQuage and a double from Mooney scored two runs to bring Wesson closer at 5-3.

After clawing back into the game, senior Shaun Chunn roped a two-run RBI double to right first to increase the St. Andrews lead to 7-3.

Smith took the loss on the mound for Wesson, pitching 3.1 innings, giving up eight runs (six earned) on eight hits, one walk and two strikeouts. Sophomore Will McInnis and Hulon pitched in relief of Smith.

McQuage led Wesson at the plate in game one, going 2-for-4 with one RBI. Middleton and Mooney each had one RBI to round out the scoring.

As the series shifted to Wesson, the Cobras fell behind early and couldn’t come back as they fell to the Saints in game two by a score of 10-7.

The Saints scored eight runs in the first three innings to take command of the game with an 8-0 lead.

Wesson got on the board in the bottom of the third inning with a two-RBI single from Middleton to cut the deficit to 8-2.

The Cobras fought back in the bottom of the fifth with an RBI single from McQuage and a three-RBI triple from sophomore Slay Acy to cut the St. Andrews lead to only 8-6.

The comeback attempt fell short as the Saints added on two more runs and the Cobras scored one run in the bottom of the seventh as their season ended by a score of 10-7.

Mooney got the start for Wesson and pitched four innings, giving up eight runs (three earned) on seven hits and three walks. Middleton and Burns pitched in relief of Mooney.