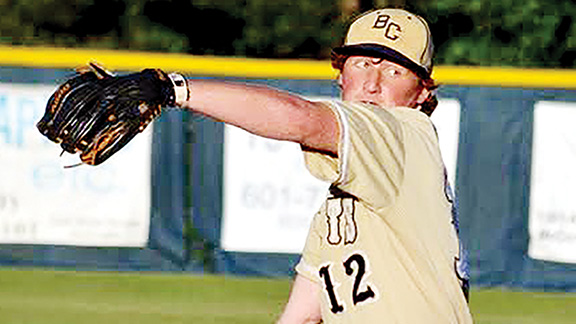 Junior Bryce Bullock of Bogue Chitto (12) winds up to pitch in their game two playoff loss to French Camp Monday evening. The Bobcats finished 14-14 on the 2017 season. (Photo by Stacy Leake)

The Bogue Chitto Bobcats hosted French Camp Monday night for a win or go home game three of the second round of the playoffs with French Camp taking the win by a score of 10-6.

The Bobcats took care of business on Saturday to set up game three of the series at Bogue Chitto. The game started with the Bobcats taking a 1-0 lead Monday when Trey Crittenden sent one over the fence in right-center field.

The Panthers came out in the top of the second and scored two runs to take the lead. The Bobcats scored one more in the bottom of the second to tie the game.

The Panthers took a commanding 10-3 lead after strong hitting in the third and fourth innings.

However, with the deficit, the Bobcats did not show defeat. Shaw King was sent to the mound to pitch the rest of the game, giving a spark to the Bobcats.

The Bobcats scored three runs in the next two innings to inch closer to the comeback. The Panthers would go into the top of the seventh inning with a 10-6 lead.

The Bobcat defense held their ground and got out of the inning for one more shot. With two on base and no outs, the Bobcats put the ball in play, but the Panthers would roll a double play to get two outs.

The next Bobcat batter hit a hard fly ball in the outfield, but the Panthers made the catch and defeated the Bobcats 10-6 to advance to the next round of playoffs.

Trey Crittenden had the big hit in the game for Bogue Chitto with a home run. Tucker Lambert and Tanner Gunther each had two singles for the game. Connor Price and Micah Smith both had a single each.

Fletcher Travis led French Camp at the plate with two doubles and a single. Zach Avent had two doubles to follow up. Weeks, Edwards and Seth Box both each had a double to round out the hitting total for Bogue Chitto.

The loss ends the season for Bogue Chitto as they finished the 2017 campaign with a 14-14 record, a district championship and a successful playoff run. Seniors Grant Leake and Micah Smith played the final game of the Bogue Chitto careers Monday night in their playoff loss.

The Bogue Chitto Bobcats should be loaded for another playoff run during the 2018 season.