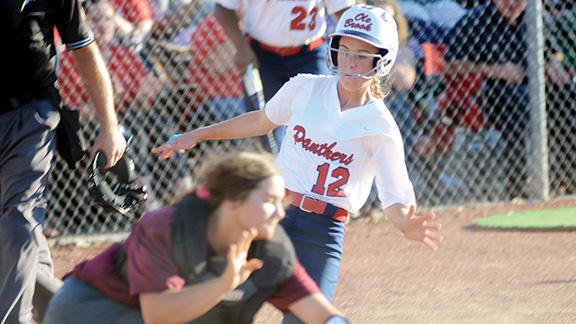 Sophomore Kat Wallace of Brookhaven (12) goes for the slide at home plate in their game two win versus Long Beach Tuesday evening. (Photo by Dylan Rubino)

The Ole Brook Lady Panthers could not follow their momentum from their game two win in game three Tuesday night.

Long Beach jumped out to a big lead early in the fourth inning and never looked back, taking the series by a score of 11-5 in the decisive game three.

The loss ends the 2017 season for Ole Brook with a  19-12 overall record and one win away from an appearance in the South State title series.

With their backs against the wall, the Ole Brook Lady Panthers scratched and clawed until the end and walked it off to force a decisive game three by a score of 3-2.

With the game tied 2-2 in the bottom of the seventh, freshman Meg Foster reached first on an error by the catcher to get the inning started. Senior Cheyenne Motley roped a double over the head of the right fielder to put runners on second and third with one out.

Sophomore Marli Peden came on third to pinch run for Foster and the move paid off. On the first pitch to the next batter, the ball sailed past the catcher and Peden raced to home plate, beating the tag to win the game in thrilling fashion.

The win forces a win or go home game three against two great teams looking to advance to the South State finals.

It didn’t look good for the Lady Panthers to start off, as Long Beach opened up the first inning taking a 1-0 lead. An error on a groundball hit to senior shortstop Macy Ziskin allowed the runner to score from third for Long Beach.

The game would remain the same until the bottom of the fourth, where the Lady Panthers took the lead. It was a wacky start to the inning. Long Beach head coach Scott Zink was ejected from the game for arguing a call made at first base with the home umpire. The ejection seemed to spark the Lady Panthers and the atmosphere in the inning.

With runners on second and third in the bottom of the fourth, junior Jadeyn Fuller brought both runners home on a two-RBI single to center to take the 2-1 lead.

Long Beach tied the game up in the bottom of the sixth inning when a throw to third base got away on the steal attempt and brought the runner home to tie it at 2-2.

The double by Motley, the wild pitch and the winning run by Peden got the Lady Panthers the walk-off 3-2 win.

Fuller pitched a great game for the Lady Panthers, going all seven innings and giving up two runs (one earned) on four hits, one walk and three strikeouts. Fuller also led the Lady Panthers at the plate, going 1-for-3 with two RBIs. Motley, senior Tia Bussey, freshman Madi Miller and sophomore Rileigh Allen each had a hit for Ole Brook.

With the season ending from the game three loss to Long Beach, seniors Macy Ziskin, Cheyenne Motley, Tia Bussey and Jada Henderson all played their last game in an Ole Brook uniform.

The seniors will leave a strong legacy behind for the future of the Lady Panther program and the 2018 season.