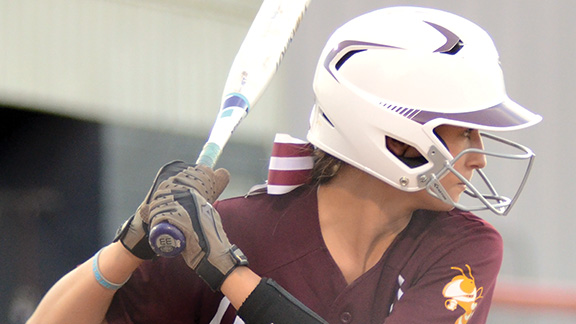 Kaylyn Chemin of Enterprise steps in the batter’s box in a game played recently. (Photo by Dylan Rubino)

Season ends for Enterprise vs. Lake

After dropping game one of the series in the 2A playoff series Monday night, the Enterprise Lady Jackets had their backs against the wall returning home for games two and three Tuesday evening.

The Lady Jackets bounced back and forced a game three by a score of 7-5, but could not win the series as they dropped the decisive game three 2-1.

The loss in game three ends the 2017 season for Enterprise with a 12-15 overall record, including a district championship and a run in the 2A state playoffs.

“I am so proud of the team this year,” Enterprise head coach Charissa Burke said. “The girls have worked through several things this year and because they worked as a team, they had a good season.  We will continue to work hard and look forward to better things in the years to come.”

Needing a win to extend the series, the Lady Jackets responded in a big way in game two. Trailing 5-2 heading to the bottom of the seventh, Enterprise rallied in the final inning to score five runs and walk it off by a score of 7-5. The win forced a doubleheader Tuesday with the winner take all game three shortly after.

It would take until the bottom of the fourth for the Lady Jackets to get on the board with two runs to cut the deficit to 5-2.

Trailing 5-2 heading into the bottom of the seventh, the Lady Jackets came up big in the most important inning of the season.

Five straight singles in the bottom of the seventh helped the Lady Jackets make the great comeback. Morgan Smith, Molly Burke, Jana Nations, Abby Richardson and Kaylyn Chemin each had a single in the inning. Richardson led the team with three hits for the game.

Smith, Burke, Nations, Chemin, Lauren Gartman and Carly Polk each had one hit to round out the hitting total.

Haley Nations got the start on the mound for Enterprise and pitched all seven innings, giving up five runs with six strikeouts and two walks.

After their biggest win of the season, Enterprise needed to turn things around quickly in order to advance to the next round in the critical game three.

Lake scored two runs in the top of the third inning and held that lead for the majority of the game.

The Lady Jackets almost pulled off their second seventh inning rally in a row, but only scored one run and fell short to Lake by a score of 2-1. The loss ends the 2017 season for the Lady Jackets and the win advances Lake to the South State finals against Taylorsville, who beat Loyd Star last week.

The Lady Jackets did not get their first hit of the game until the bottom of the sixth inning, where Natalia Harris hit a single to get Enterprise on the board. Polk followed up with another single, but couldn’t get a run home in the inning.

Nations and Chemin each had a single in the bottom of the seventh to get Enterprise on the board, but they couldn’t tie the game up.

The Ole Brook Lady Panthers could not follow their momentum from their game two win in game three Tuesday night.... read more