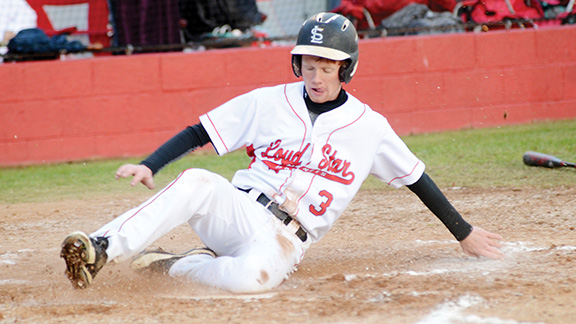 Junior Dylan Smith of Loyd Star slides safely at home in their game one win in the 2A quarterfinals against Richton Thursday night. (Photo by Dylan Rubino)

Loyd Star takes down Richton in game one

In a rather cold night at Loyd Star High School, the Hornets braved the elements and overcame errors on defense to take game one against the Rebels Thursday night by a score of 8-2.

The win moves the Hornets one win away from a repeat appearance in the South State finals. The win also gives Loyd Star an impressive 32-1 record.

The Hornets got on the board first in the bottom of the first inning without recording a hit. Richton junior Kyle Earwood gave up two walks to put runners on first and second for Loyd Star. A ground ball got by the third baseman for Richton and scored the runner from second to give Loyd Star the 1-0 lead.

Errors would be the theme of the night for both teams. In the bottom of the third, senior Bradyn Brister hit a ground ball that got by the Richton shortstop, which scored junior Dylan Smith from second to make it 2-0 Loyd Star.

An error by Loyd Star in the top of the fourth would get the Rebels on the board to cut it to 2-1. Richton junior Cameron Carter followed with an RBI single to left field to tie the game at 2-2.

Besides the rocky fourth inning, junior pitcher Cade Hodges had command of his pitches and looked in control from start to finish, pitching the entire seven innings.

Loyd Star regained the lead in the bottom of the fourth when sophomore Dane Smith ripped an RBI double to left-center to make it 3-2. With runners on second and third, Hodges dropped a suicide bunt attempt and the throw got past the first baseman and scored two runs to extend the lead to 5-2. Later in the inning, Hodges scored from third on a wild pitch behind home plate to make it 6-2 Loyd Star.

Loyd Star tacked on two more runs in the bottom of the sixth to seal the victory and took game one. Loyd Star will travel to Richton for game two tomorrow night. The Rebels have their backs against the wall and need a win to keep the series alive and force a do-or-die game three at Loyd Star Saturday night. Senior Parker Flowers will get the start tomorrow for Loyd Star. First pitch is set for 7 p.m.