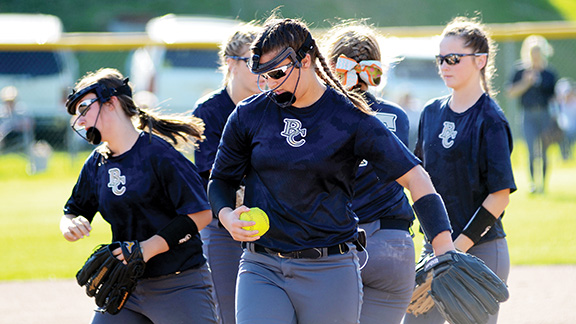 Bogue Chitto breaks away from the mound in their playoff win over Ethel Saturday. First pitch tomorrow against Hamilton is set for 11 a.m. (Photo by Dylan Rubino)

Redemption is on the horizon for the Bogue Chitto Lady Cats after what happened in the 2016 state title series.

Bogue Chitto came out of the gates blazing last year in game one, defeating Smithville by a score of 10-7. The Lady Cats were one win away from a state championship, but fell short of their ultimate goal, losing their next two games and a state championship slipped from their hands.

The opportunity is there to make up for what happened last year, but the team isn’t thinking about forgetting what happened in the state title series. This is a new year, a new team and Bogue Chitto is only focusing on what lies ahead.

“We just have to keep doing what we are doing. It’s nothing out of the ordinary,” Bogue Chitto head coach Scott Leggett said after their South State title win Saturday. “Don’t make it any more than what it really is.”

That routine seems to be working for the Lady Cats pretty well, as the team enters the state title series winner of 11 in a row. Bogue Chitto is 6-0 in the playoffs, but they’ll face their toughest task yet in Ridgeland tomorrow against Hamilton.

“Hamilton has a very good team and they swing the bats well,” Leggett said. “They have several come-from-behind wins this year. We just need to stay true to our game, which is great pitching and routine, solid defense.”

That great pitching from Bogue Chitto has come from star freshman Codi Leggett, who pitched two no-hitters in a row in their playoff wins against Ethel.

Leggett has dominated opposing batters with her fastball, change-up and pitch location, keeping runners off base and providing no scoring opportunities for the opponent.

In her two starts against Ethel, the freshman pitched 14 innings, giving up no runs, no hits, four walks and striking out 14 batters.

Leggett is pitching her best at the right time and that will mean a lot heading into the state title series.

The lineup hasn’t been putting up huge numbers on offense lately, but the bats are doing their job to give Leggett enough runners to work with to feel comfortable on the mound. Whenever the Lady Cats need a run, the bats always seem to come through and maybe that’s all they need to win games.

However, Bogue Chitto will have to deal with their toughest challenge yet in keeping up with the Hamilton offense. The Lady Lions have scored an impressive 289 runs on the season and have put teams away early with their bats. When Hamilton trailed in games this season, they used their aggressive approach at the plate to score runs and quickly get them back in ballgames.

Hamilton also enters the title series on a hot streak by winning their last 12 games. With an overall record of 24-6, the Lady Lions have proved to be one of the best teams in 1A softball in the state.

The Lady Lions knocked off Smithville, the team that beat Bogue Chitto in the title series last weekend, in the North State title series over the weekend in two games.

Bogue Chitto knows they have a big hurdle to jump in order to reach their goal of a state title, but the Lady Cats are ready to bounce back.

“We have hit the ball well this season and we need to continue having confident, solid at-bats in order to win it this time,” Leggett said.

First pitch Wednesday is set for 11 a.m. at Freedom Ridge in Ridgeland.