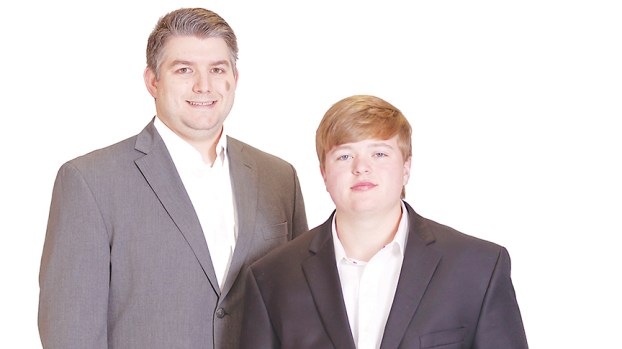 Photo submitted/Pictured are, from left: Jon Goldman and Logan Holmes.

After five attempts, Logan Holmes’ top score on the ACT test was a 30.  That perseverance led to Holmes being named Enterprise Attendance Center’s STAR student.

The STAR program — Student Teacher Achievement Recognition — seeks to recognize students for academic and ACT test achievement. Students are awarded a certificate and medallion as recognition upon becoming a STAR student. If a student scores a 25 or higher on their ACT, they are eligible for the program. The senior with the highest score on the ACT is named STAR student.

“Logan is a special student. My first year at Enterprise, he was a freshman in my Algebra I class and he actually scored a perfect score on the Algebra I state test. I immediately knew that he was a special student by making that score. He’s always worked hard, in academics and in life. He’s really involved in extracurricular activities. I know he’s going to do great things in his life,” Goldman said.

After high school, Logan plans on attending the University of Southern Mississippi in Hattiesburg, where he will enroll in the college of nursing.

“I find the nursing field really interesting, I like to take care of people. It’s a good job and it’s got good security. I plan on becoming a nurse practitioner one day,” Holmes said.