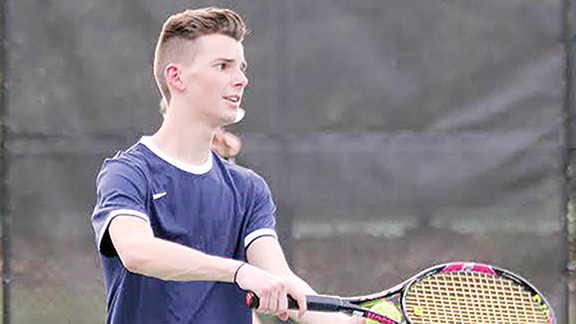 Cooper Patterson of Brookhaven gets ready to serve in a match played recently. (Photo submitted)

Players on the Brookhaven tennis team advanced in the second round, but fell short in the state semifinals Wednesday afternoon in Oxford.

The boys’ singles, both boys’ doubles pairs and the mixed doubles pair were the ones to advance in the playoffs.

On Tuesday, the Panthers competed in the quarterfinals and three of the four teams competing advanced to the semifinals.

In the mixed doubles match, Mackenzie Jackson and Cooper Patterson of Brookhaven defeated Reagan Salter and Bailey Simpson of Lewisburg 6-1, 3-6, 7-5.

In the semifinals on Wednesday, the three winning groups for Brookhaven all lost.

In the boys’ doubles match, the eventual state championship pair of Max Mauney and Ryan Mounce of Oxford defeated Will Moak and Dalton Fortado of Ole Brook in straight sets 6-1, 6-0.

In the mixed doubles match, Macie Craddock and Micah Williams of Grenada took down Mackenzie Johnson and Cooper Patterson of Ole Brook in straight sets 6-3, 6-2.

Redemption is on the horizon for the Bogue Chitto Lady Cats after what happened in the 2016 state title series.... read more