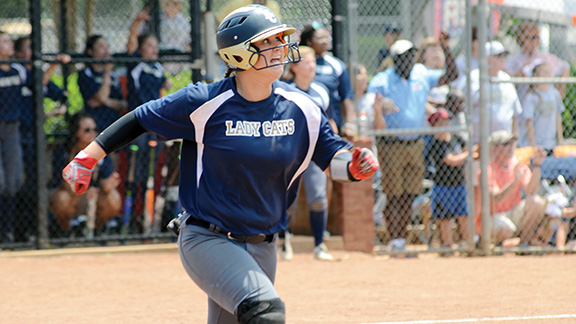 Bogue Chitto walks it off in game one

RIDGELAND — Bogue Chitto freshman pitcher Codi Leggett took a beating in game one of the 1A fast-pitch state championship series against Hamilton Wednesday.

At a play at home plate in the third inning, Leggett collided with a base runner to get the force out. In the fifth inning, the freshman took a pitch off her injured knee and was slow to get up.

But nothing could keep her down as Leggett came up clutch in the biggest moment of the game with a walk-off single in the bottom of the seventh to take game one 4-3.

“It was clutch.  Everyone came through and Codi came through in the clutch,” Bogue Chitto head coach Scott Leggett said. “It’s big to get game one in any series. Codi threw well and our defense made plays behind her. At the plate, we should’ve hit the ball a little bit better, but in the end we came through.”

Leggett led the Lady Cats at the plate, going 3-for-4 with three singles on the afternoon. Leggett also pitched all seven innings, giving up three runs on seven hits, one walk and four strikeouts.

The Lady Cats got on the board first in the bottom of the opening inning with RBI singles from senior captain Terrah Nelson and junior Reagan Kirkland to give Bogue Chitto the 2-0 lead.

Hamilton tacked on a run in the top of the third on a throwing error to first base, scoring the runner from third to make it 2-1 Bogue Chitto.

The lead slipped away from Bogue Chitto in the top of the fourth as junior captain Taylor Brock blasted a two-run homer over the center field wall to give the Lady Lions the 3-2 lead.

Despite falling behind, the Lady Cats stayed positive and poised.

“Brock is one of their experienced players. She’s a very good hitter,” Leggett said. “Hamilton has a great hitting team and Codi did a good job of keeping them off-balance after that.”

The game went scoreless from there until the bottom of the seventh inning.

With runners on first and second with no outs, sophomore Karly Leake hit an RBI single to score senior Cherie Savoie from second to tie the game at 3-3.

Leggett followed up at the plate with an RBI single to center field to score the runner from third to take game one by a score of 4-3.

The offense once again did their job for Bogue Chitto with timely hitting in the most important moments to back up Leggett on the mound. That philosophy has carried the Lady Cats all the way to the 1A state title series and now they’re one win away from another state championship.

“I feel like we can hit the ball better one through nine in the lineup,” Leggett said. “The south region has some of the best pitchers in the state and that’s what prepares us for this moment and hopefully that’ll help us win this tomorrow.”

Nelson went 2-for-4 at the plate with a triple in the bottom of the seventh and a single. Leake also went 2-for-4 with two singles.

A win Thursday will give the state championship to Bogue Chitto. First pitch in Ridgeland is set for 4 p.m.

After dropping game one of their opening playoff series against Lake 2-0, the Loyd Star Hornets have come out angry... read more