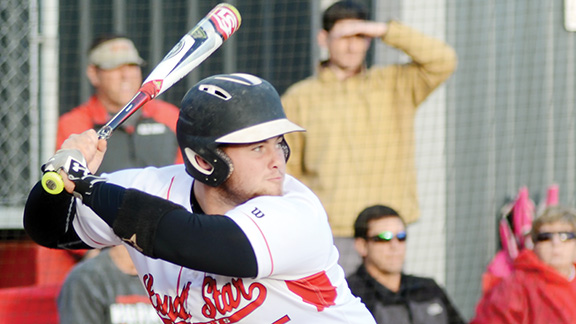 Senior Bradyn Brister of Loyd Star gets ready to swing in their playoff win over Richton last week. Brister is one of the senior leaders head coach Jared Britt wants to see step up Thursday. (Photo by Dylan Rubino)

After dropping game one of their opening playoff series against Lake 2-0, the Loyd Star Hornets have come out angry and have looked unbeatable.

Since that loss, Loyd Star has out-scored their opponents 44-13, resulting in four wins and a trip to the South State title series, where they’ll face St. Joseph Catholic Thursday night at home.

“St. Joseph is a veteran ball club with 10 seniors on the team who play and contribute,” Loyd Star head coach Jared Britt said. “They are battle tested and will be ready to play against us.”

This matchup is a rematch of the South State title series from last season, which Loyd Star won.

The offense has been on a hot streak as of late for Loyd Star by scoring 20 runs in their two wins against Richton in the 2A quarterfinals.

The biggest performance of the series came in game two from Flowers, who went 4-for-4 from the plate with three home runs and eight RBIs to lead the attack.

The seniors on the team have led the Hornets at the plate all season long, including Flowers, Konner Allen, Bradyn Brister and Cole Smith. The power bats of Flowers and junior catcher Tucker Watts have brought explosiveness to the lineup and always seem to come up clutch with big hits.

“Our leaders will need to step up and lead the way,” Britt said. “It should be a very tight series between two solid baseball programs.”

The Loyd Star lineup will face a tough pitching staff with St. Joseph Catholic. Pitching has been key for the Bruins this season by only giving up 74 runs in 31 games played. The pitching staff owns a collective 1.47 ERA and have kept opposing lineups off balance at the plate all season long.

Senior Bradley Reynolds leads the Bruins pitching with a 9-1 overall record and a 1.29 ERA. The only loss of the season for Reynolds came against Lake back in early April. Reynolds will take the mound in game one for St. Joseph.

The Bruins also have a strong offense at the plate to back up their pitching. The team owns a .336 batting average and has outscored opponents 274-74 on the season.

St. Joseph is led by junior Trey Frierson and senior Michael Buck at the plate. Frierson leads the Bruins with a .411 batting average and 39 hits on the season. Buck has brought the power for the Bruins, leading the team with 12 doubles and 43 RBIs.

With a 27-4 overall record, the Bruins have rivaled the Hornets as the best team in the 2A division in the state of Mississippi. St. Joseph is also the team that put Enterprise out of the 2A state playoffs.

Loyd Star is a complete team with depth at pitching and throughout the lineup. Flowers and Tucker Watts have been clutch at the plate for the Hornets so far in the playoffs. In every tough situation thrown at them, Loyd Star always seems to have the right answer at the perfect time.

The Hornets have all the ingredients of a state championship, but they’ll be tested in the South State title series against the Bruins.

Game one Thursday night at Loyd Star is set for 6 p.m.

“We will have to play well in all phases of the game, but I am confident in our guys,” Britt said.

Kara and Katy Clark of West Lincoln haven’t lost a doubles tennis match since the state title match when they... read more