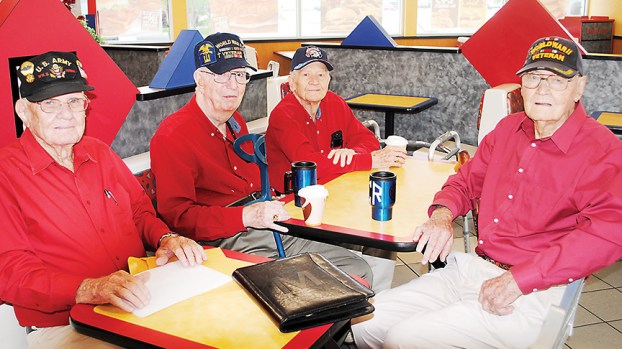 It’s 7 a.m. and the Brookhaven Five are making their way to their regular table at the Burger King on Brookway Boulevard.

The employees know their order and where they sit. They know their smiles.

Four days a week, for the past 30 years, the five buddies bound together by friendship, war, service and honor come to drink coffee and reminisce about their days in the military.

The Brookhaven Five, all in their 90s, are actually just four — Air Force veteran Cecil Rhodes, Army veterans James Swager and Don Hemphill and Navy veteran Wesley Kent. The fifth of the quintet, Air Force veteran Clell King, passed away recently but the guys still include him in spirit during their breakfast meetings.

This week they’re celebrating an anniversary of sorts. It was six years ago Wednesday that the Brookhaven Five departed on the first Mississippi Gulf Coast Honor Flight. The National Honor Flight network began in 2005 with a few veterans being flown in private planes and in recent years had grown to include chartered flights for veterans to come and visit memorials in Washington D.C.

Mississippi had its first in 2011 and in three years hosted six flights, shuttling 592 WWII vets to see their monument.

“When we found out about it it, we called and gave them five names and told them we were a package deal. If one of us can’t go, none of us are going,” Rhodes said. All five were on that flight of 83 veterans headed to D.C.

It took between $70,000 to $80,000 in corporate sponsorships and donations to fund the first Mississippi flight. Once the money was raised, the WWII veterans honored by the flight would fly for free. The Brookhaven Five raised around $2,400 in the local area.

The crew had police escorts all the way from Biloxi to the airport in Gulfport. “It’s a trip I’ll never forget,” Kent said.

The veterans toured the WWII Memorial, the monuments of the Korean and Vietnam conflicts, the Lincoln Memorial, the Iwo Jima Memorial and Arlington Cemetery. Swager was impressed with Arlington Cemetery and the wreath-laying ceremony at the Tomb of the Unknown Soldier. “On our way up there, we also got letters from school children. They told us how much they appreciated us and what we did,” Swager said.

“The most impressive thing to me, was to see that ‘Kilroy’ had been there,” Hemphill said.

Kilroy was an expression that became popular during World War II.

Hemphill continued, “My favorite thing about the trip was the crowd that greeted us when we got back into Mississippi. There were thousands of people in the terminal cheering us on.”

Rhodes said, “I liked the lights that were lit up that represented the soldiers that were killed. I believe it was around 400,000, it may have been more. There was so much patriotism back then, we loved our country.”

The Brookhaven Five meets Tuesday through Friday at Burger King. Their Friday rule is that the four members must wear a red shirt and a WWII baseball cap. “It costs you a dollar if you don’t wear a red shirt on Fridays,” Rhodes said. The crew wears red in honor of the soldiers and servicemen who were killed.

The spec building at Linbrook Business Park is huge and shiny. And it is empty. Some see its emptiness as... read more