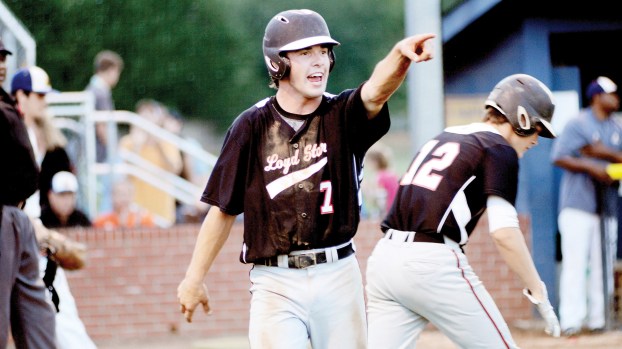 Photo by Dylan Rubino/Parker Flowers of Loyd Star celebrates after scoring a run in the top of the third in their 4-1 loss to St. Joseph Friday night.

MADISON —  After an exciting game one win at home Thursday night, the Loyd Star Hornets could not clinch the South State title in Madison Friday, as the Bruins scored three runs in the bottom of the sixth to take game two 4-1.

The loss gives Loyd Star their second disapointment of the season with a 34-2 overall record as St. Joseph forces a winner-take-all game three Saturday at Loyd Star High School.

It was a pitchers duel the majority of the game with both starters dealing through the first five innings.

After a scoreless first two innings, the Hornets got on the board first with an RBI single from junior Cade Hodges to score Flowers from third to give Loyd Star the 1-0 lead. With two outs and the bases loaded in the inning, junior Tucker Watts struck out to end the scoring threat.

The Bruins answered in the bottom of the third inning with a double to start it off. With a runner on third, senior Trey Frierson for St. Joseph hit an RBI sacrifice fly to tie the game at 1-1.

Both starters would have their way on the mound going into the sixth inning with the game tied 1-1.

Just when things were going right for Flowers on the mound, momentum changed quickly as the Bruins led the inning off with a triple. The triple woke up a quiet Bruins dugout and the bats soon followed. St. Joseph followed by taking the lead with three runs to take game two and force a game three by a score of 4-1.

The Bruins pitching slowed down an explosive Loyd Star lineup and kept them off balance.

Freshman Tanner Watts will get the start for Loyd Star on the mound in the decisive game three. The winner today will advance to Trustmark Park in Pearl for the 2A state championship and be named South State champions. First pitch is set for 5 p.m.

Wesson’s tennis team sent all 12 starters to the MHSAA State Championships in Oxford, where they all shined on the... read more