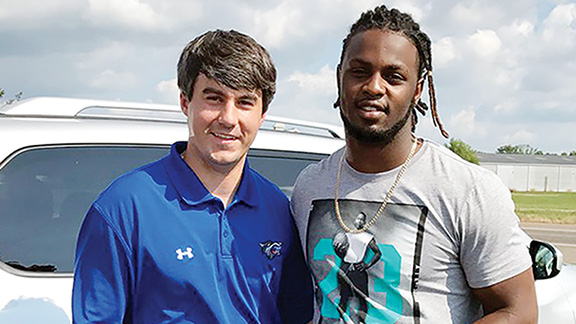 After announcing his transfer from Auburn University just over a week ago, quarterback Woody Barrett has found a new home in the Lincoln-Copiah county area.

The former Tiger signal-caller is heading to Co-Lin to continue his football career with the Wolves.

“Excited to have Auburn transfer joining the Pack,” Davis said in his post Sunday.

Barrett was only with the Auburn program for one season before announcing his decision to transfer last week.

As a former four-star prospect coming out of high school, Barrett red-shirted his freshman year in 2016 after suffering from an ankle injury near the start of the season.

Barrett brings great size to the quarterback position for Co-Lin with a 6-foot-2, 239-pound frame. Barrett spent his time at Auburn behind eventual starter Sean White and John Franklin III on the quarterback depth chart.

Barrett was expected to compete for the starting job at Auburn in spring ball with Baylor transfer Jarrett Stidham, White and Franklin.

In Auburn’s spring game, Barrett only played two drives, going 2-for-2 passing with 14 yards on the game.

The plan for Barrett is to spend a semester at a junior college and then moving on to potentially another SEC program.

Barrett was named to the Class 8A all-state team and a Mr. Football finalist after his stellar senior year.

Co-Lin falls to Northwest in playoffs