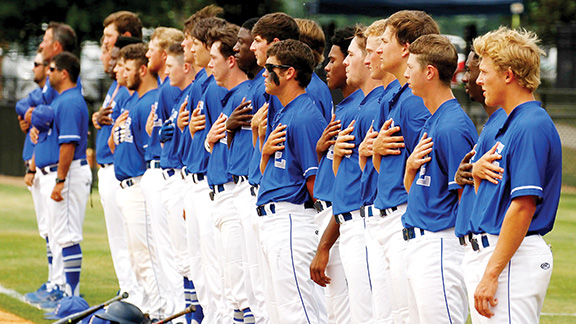 The Co-Lin Wolves line up for the national anthem before their playoff series against Northwest over the weekend. (Photo submitted)

Co-Lin falls to Northwest in playoffs

The two losses end the Wolves’ 2017 season and give Co-Lin an overall record of 20-27. This year was Co-Lin’s first trip to the playoffs in 12 years.

The Wolves watched game one slip away early and could not recover in the 10-2 loss to the Rangers on Thursday.

Northwest’s Brody Catt drove in two with a double in the second inning, and Rangers never looked back.

An error and a double stretched the Rangers lead to 5-0 in the bottom of the fifth.

Jaylyn Williams finally got the Wolves on the board in the sixth with a single that scored Kyle Whittington.

The Rangers responded with two more runs in the bottom half of the frame, giving Northwest a 7-1 advantage.

Williams drove in Whittington again in the eighth, but the effort fell short as Northwest plated two runs in the eighth to win the game on a run-rule.

Williams led the Wolves at the plate. The freshman posted three hits and drove in two runs. JT Wright and Whittington finished with two hits each.

Brook Boolos, Aaron Campbell, and Brody Catt led the Rangers at the plate as each player racked up multiple hits. Catt led Northwest with three RBIs.

Game two was a pitcher’s duel through four innings, before the Rangers lit up the scoreboard in the later frames.

Northwest plated the first run on a fielder’s choice in the bottom of the fifth to take a 1-0 lead.

The Wolves quickly responded in the top of the sixth when Tyler McLeod battled through a 12-pitch at bat and ripped a two run double to left. Co-Lin led 2-1 going into the seventh.

Northwest’s bats got hot late as the Rangers hit three homeruns to stretch the lead and secure a 9-3 win.

Williams, McLeod, and Austin O’Flynn led the Wolves with two hits each, while McLeod drove in Co-Lin’s only runs.

Spencer Cayten led the Rangers with three hits and a homerun, while Campbell and Zack Pope each added a homer of their own.

Christian Day got the start for Co-Lin and threw five innings. He gave up three runs (two earned), four hits, three walks, and struck out five. Blake Sigrest suffered the loss for the Wolves after a one-inning outing. He gave up two runs (one earned) and two hits.

Fishing remains steady in the area

Below are the most current reports on fishing conditions of lakes in the local area. Information is courtesy of the... read more