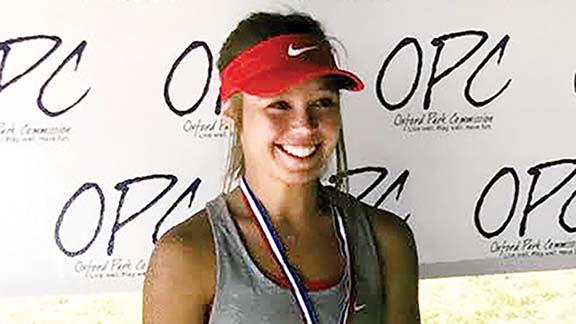 Loyd Star senior Ashlyn Locke had an amazing run for the Hornets in the MHSAA state tennis tournament last week in Oxford.

Locke won her first three matches in the tournament in girls’ singles play to advance all the way to the 2A state finals.

However, her run came to an end in the girls’ singles finals against Rachel Van Horn from Winona, losing the match in straight sets 7-5, 6-0.

Even with the loss in the finals, reaching the state championship match is a tall task, and Locke had little problems getting there.

In the first round, Locke won by default against her opponent from Leland. In the quarterfinals, Locke took down Madison Hester of Eupora in straight sets 6-4, 6-0. In the semifinals, the senior defeated Nicole Becker of Tupelo Christian Prep in straight sets 6-2, 6-3.

In boys’ singles, Gavin Thomas fell in the opening round to Alexander Collins of Union in straight sets, 6-0, 6-3.

In boys’ doubles, Blayne Brister and Will McCullough of Loyd Star won their opening round match against Caleb Bass and Corey Vallejos of Mize in straight sets 6-0, 6-1. The duo fell to Holt Stockett and Nicholas Zouboukos of St. Joseph Catholic in the quarterfinals in straight sets 6-1, 6-1.

In the second boys’ doubles pairing, Brantley Brister and Tucker Hoeniges of Loyd Star dropped their opening round match to John Carpenter and Rhett Parker of East Webster in straight sets 6-0, 6-0.

The girls’ doubles pairing of Caylee Grace Yarborough and Morgyn Brister from Loyd Star made a run to the state semifinals, where they lost to Carolina Upchurch and Lauren Williamson of Tupelo Christian Prep in straight sets 6-3, 6-0. The duo won their opening round match against Larisa Armour and Alexandra Ladner of St. Joseph Catholic in straight sets 7-5, 6-4. They followed up winning their quarterfinals match against Sarah Hults and Allyson Massey of resurrection in straight sets 6-0, 6-3.

After announcing his transfer from Auburn University just over a week ago, quarterback Woody Barrett has found a new home... read more