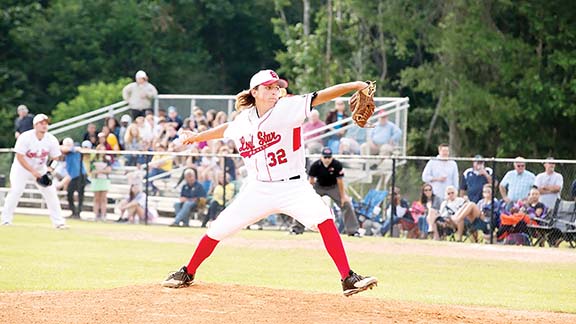 Tanner Watts of Loyd Star goes through his stride on the mound in their 10-9 win over St. Joseph Saturday afternoon. (Photo by Amy Rhoads)

This is nothing new for the Loyd Star Hornets.

It was just over a year ago that the Hornets faced East Union in the 2A state title series at Trustmark Park in Pearl.

Entering the series 25-8 overall, the Hornets had the right momentum heading into the matchup against the Urchins.

It was East Union that would hoist the trophy in the air, sweeping Loyd Star in two games, both by a score of 5-1.

The Hornets want to wipe that bad taste out of their mouths against East Union today in Pearl and that starts with getting a win to start the series.

“East Union is a fundamentally sound baseball team,” Loyd Star head coach Jared Britt said. “They play good defense and make you pay with their bats, but I feel like the boys are focused and ready for the opportunity to have a second chance at beating them.”

Loyd Star finished a grueling South State series against St. Joseph Catholic, where the Hornets won a roller-coaster game three, blowing a five-run lead in the top of the seventh and coming back to pull out the win in the bottom of the seventh 10-9.

It was an emotional win for Loyd Star, beating their rival and claiming back-to-back South State titles.

Now comes the real revenge, once again facing East Union and the team that ended a dream season for the Hornets one year ago.

This time around, Loyd Star comes into the matchup as the deeper and more talented team, which East Union was last season.

The Hornets enter the matchup tomorrow with a 35-2 overall record, with their only two losses coming against two great pitchers versus Lake and St. Joseph Catholic.

In those two losses, the Hornets scored a total of one run, which came against Bradley Reynolds of St. Joseph Catholic in game two of the South State series.

If there is one spot where the Hornets have proved to be vulnerable, it’s that a great pitcher can slow down the hot bats.

The sophomore duo has been giving opposing pitchers a rough time, but Loyd Star has the pitchers to slow them down.

Junior pitcher Cade Hodges has been throwing his best as of late for the Hornets, giving up only three earned runs in his four starts in the playoffs, striking out 35 batters and only giving up five walks.

The pitching performance of freshman Tanner Watts has been the difference in the staff for the playoffs. In his three appearances in the playoffs, Watts has pitched 15.1 innings, giving up four earned runs, five walks and striking out 16 batters in those appearances, including two starts.

The bats of senior Parker Flowers, junior Tucker Watts and sophomore James Beard caught fire during the St. Joseph Catholic series and those bats could be the key to winning the 2A state championship this time around.

It all starts tomorrow at Trustmark Park. First pitch is set for 1 p.m.

“I look forward to a very good series, but another battle like it was against St. Joseph,” Britt said. “Hopefully we can come out on the winning end this year.”

All the hard work has paid off for Bogue Chitto senior Cherie Savoie. Not only did she win a state... read more