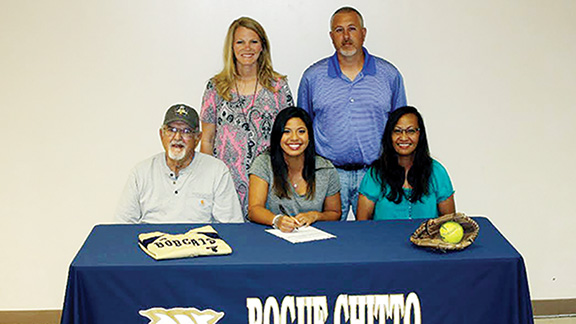 All the hard work has paid off for Bogue Chitto senior Cherie Savoie.

Not only did she win a state championship in softball this school year, but on Monday night, Savoie signed with Southwest Community College to continue her softball career.

The senior has played for the Bogue Chitto softball team for five years, starting her career when she was in the eighth grade. She was chosen as the Most Improved player for the 2014 season, the coaches’ awards in the 2015 season and the hustle award in the 2016 season.

She was a member of the state championship team in 2014 and the state title team this year.

As the leadoff hitter for the Lady Cats, Savoie hit for a .396 average and led the team with 40 runs scored. The senior was also third on the team in hits with 36 on the season and had 12 RBIs to show for it.

Savoie was a critical part of the success of Bogue Chitto batting leadoff. She got on base and when she did, she was more than likely to score with a strong offense to follow behind her.

“Cherie did a fantastic job this season. She worked hard in the offseason and improved her hitting tremendously,” Bogue Chitto head coach Scott Leggett said. “She was a vital part to our success this season, helping us win the state championship. Cherie was a great leader on and off the field. We will dearly miss her next season, but wish her the best at Southwest.”

Winning the state championship was the highlight of her career, especially winning it her senior year.

“I couldn’t do it without the ladies behind us,” Savoie said after winning the state title last week. “It’s an amazing feeling.”

After a storied career, her time at Bogue Chitto comes to an end, but it’s just the beginning for Savoie as she continues her career at the collegiate level.