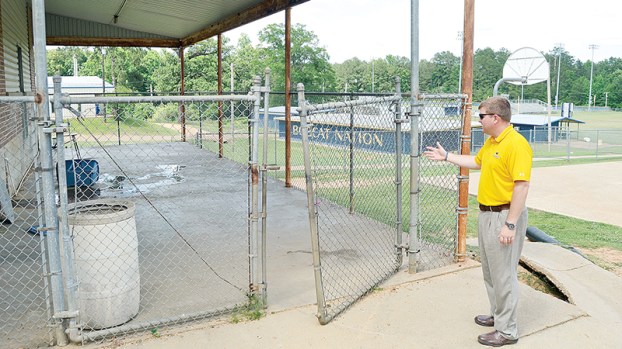 Campus to upgrade ‘cage’ to classroom

The Bobcats’ “Cage” will soon become a classroom.

That’s one of many recommendations Lincoln County School Superintendent Mickey Myers shared with the school board this week.

Myers presented a list of 67 projects at the four attendance centers for consideration. Projects ranged from painting the exterior of the cafeteria at West Lincoln to to relocating a waste treatment plant at Enterprise.

Myers based his recommendations on meetings with principals, campus visits and an assessment plan from Dungan Engineering.

One project at Bogue Chitto involved remodeling the covered, fenced area at the end of the training center building into two classrooms.

The campus has seen growth in the past year — from about 680 students to about 730 — and Rayborn said space is a priority.

The area called “The Cage” used to be home to vending machines. Now it’s an empty fenced slab that students use as a shady area to cool off during breaks.

Rayborn said the building already there is used for a testing center and counselors’ offices. It would be easy to run electricity outside to the covered area and put walls on it.

Myers suggested that an accordion wall could be placed between the two classrooms to allow for the space to become one larger classroom if needed.

Myers said Bogue Chitto’s enrollment has grown from 588 to 738 in a five-year period, which is the largest jump in enrollment of the four county campuses. He said the other three — Loyd Star, West Lincoln and Enterprise — average around 825 to 850 students each year.

Myers said some of the items on his list should be addressed immediately like leaking roofs, while others are included for consideration.

“Some of those have to be addressed before we return in August,” he said.

The superintendent asked his principals to break down the projects into critical needs, basic needs and wants so they can be prioritized and evaluated.

“We want to spend wisely and be wise stewards of the resources available to us,” he said.

The district has been operating with a $28.7 million budget since June. Though it was nearly broke 15 years ago when Cheryl Shelby took over as finance director, she was able to grow the fund balance — with the administration and board’s support — to $32 million before she retired last year.

Much of the money in the fund balance comes from timber sales and 16th section leases. The district must follow state law on what it can spend, which is usually the interest from the leases.

Finance Director Sam Stewart is continuing the watch over the district’s finances.

Myers commended Shelby’s work and the diligence of the board. “They made upgrades on every campus and financially we’re in good condition and want to stay that way,” he said. “We’ve been blessed in Lincoln County.”

He said through “wise, effective management” of funds, several projects for personnel and construction and renovation have already been budgeted. The district has quotes on some projects and will advertise soon for bids when necessary, he said.

The following are Myers’ recommendations by campus, in no particular order of importance:

• Add a teacher for fifth grade

• Erect vo-ag building or implement course offerings at another site

• Check shingles on the roof of the Marilyn Hart Testing Center

• Replace or add HVAC unit for the cafeteria

• Maintenance on all exterior doors, locks and accessories

• Computers for three to six classrooms (four per class)

• Remove the pine tree near the main office

• Portico in front of the high school office is leaking

• Consider purchase of land from the Norton estate

• Consider demolition or removal of the Kirk Allen Building

• Replace awning along the east sidewalk beside the cafeteria

• Cap the corners of the cafeteria walls

• Evaluate the need for a six to eight classroom annex, plus restrooms and office

• Install cyclone fence at the west endzone of the football field

• Consider renovation of the greenhouse

The success of Downtown Jazzed Up earlier this year led to the idea for the Summer Concert Series, which kicks... read more