Terisha McNair held two things close to her heart Thursday — her toddler and her GED certificate.

She balanced both in her arms well, much like the balancing act she’s been through since Keaston was born a year and a half ago.

The 19-year-old was celebrated at a graduation ceremony at Fannie L. Mullins School, surrounded by friends, family and administrators. She was joined by fellow graduate Jayland Moore, who also received his GED.

Duncan Segura finished the program at Mullins, but did not attend the ceremony.

Moore, 19, and McNair joined the program for different reasons — McNair was a mom and Moore didn’t mesh well with a traditional classroom setting.

But both found their niche at Mullins with instructor Dorothy Quinn, who treated them like adults but loved them like babies.

“They are my babies, and I love them,” she said.

Smith said she struggled with finding her place as a student, too.

“It’s not where you start, it’s where you finish,” she said.

Smith pursued a medical degree but instructors dissuaded her from that field. “I thought, ‘Maybe they’re right. Maybe I’m not smart enough to be a doctor’,” she told the graduates.

She changed her course and took another major. Then she had an epiphany and dropped it to pursue what she wanted. She said she decided not to let people put her in a box. She moved away and started school somewhere else.

She went on to earn a bachelor’s and a master’s degree and then, because it was something that made her happy, she earned a license in cosmetology as well. Eleven years later she came home to Brookhaven because she wanted to, not because she had to.

“At the end of the day, it’s what makes you happy,” she said.

She congratulated the graduates on earning their GED and completing the high school equivalency program. “Don’t let anyone tell you this diploma is any less than any other,” she said. “You had to work for it.”

Holloway also offered congratulations. He told the pair the sky is the limit. “Don’t stop learning,” he said.

He recited a poem, Invictus, by William Ernest Henley. “I am the master of my fate. I am the captain of my soul,” he said.

The next words were his, aimed at the grads. “Put you some gas in your boat and take it to the next level,” he said.

McNair plans to continue her education and pursue a culinary arts degree. She was thrilled she was able to graduate. “I made my parents proud and myself proud,” she said. “I’m just one step closer to my success.”

Moore said a traditional class wasn’t right for him, but he was able to accomplish his goals in Quinn’s class. He said he could concentrate better without the disturbances he’d found in high school. Now he  wants to become an expert car mechanic. “I want to take my ACT so I can go to a good university,” he said.

Students Phylishia Stubbs and Candra Haynes were also recognized at the ceremony. 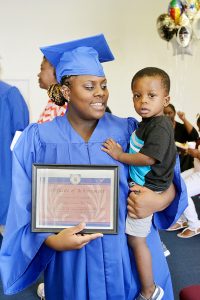 George T. Mercier has a 100-year-old grin that can still cause hearts to flutter. He’s sweet, funny, smart as a... read more