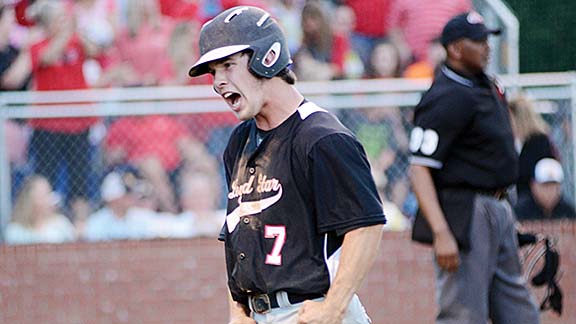 Parker Flowers of Loyd Star is pumped up after scoring a run in their game two loss to St. Joseph last week. (Photo by Dylan Rubino)

Loyd Star one win away

Loyd Star head coach Jared Britt admitted that his team was just happy to be at Trustmark Park in Pearl last year after they won South State.

A state championship last season would’ve been the first in 36 years for a great Loyd Star baseball program. Nerves were a factor and the spotlight was a little too bright as the Hornets fell to East Union.

This time around, Loyd Star knows what to expect.

The players are more comfortable, the coaching staff knows how to prepare their players for the moment better and nerves are all but gone.

As Loyd Star fans packed Trustmark Park Wednesday afternoon for game one and cheered on their Hornets, the team relished the environment and played with ease in their game one victory.

“We learned last year that you can’t be happy just making it to Trustmark. You have to work hard and prepare yourself for the moment,” Britt said. “Last year, I think it hurt the boys getting so close and not winning which has made them work harder this year.”

That hard work paid off in a big way on Wednesday as the Hornets seemed un-phased by the big stage and honed in to their main goal of winning a 2A state championship.

Junior Cade Hodges got the start in game two of the title series last season against East Union and pitched 6.2 innings, giving up five runs (one earned) on five hits, three walks and struck out four batters.

The result of that was a complete-game shutout for Hodges. He pitched seven innings, giving up no runs on two hits, three walks and struck out 13 on 112 pitches. Seventy of those pitches went for strikes.

There will be some nerves tonight for Loyd Star as a win gives them their first state championship in 37 years. A loss means a winner-take-all game three Saturday afternoon.

Senior Parker Flowers will get the start tonight for Loyd Star in a potential state title-clinching victory. In Flowers’ last start, Loyd Star loss 4-1 to St. Joseph in game two of the South State series. In that game, Flowers pitched six innings and gave up four runs (one earned) on one hit, one walk and five strikeouts.

Flowers pitched well even in defeat and Loyd Star will need his performance to continue tonight.

“We will need a solid pitching performance from Parker, much better defense than Wednesday and our bats need to heat up to give Parker some breathing room,” Britt said.

Nerves played a big factor in Loyd Star losing the state title series last year, but those are now gone. It’s a new series this time and the Hornets are one win away from their ultimate goal.

“I’m sure there will be some nerves before we start just as you would expect in any big game of this magnitude, but once the game gets underway, everyone will settle in.”

Hugh Freeze is tired of your questions

As an Ole Miss alum, it’s really hard to not sound biased about the place I spent three years of... read more