George T. Mercier has a 100-year-old grin that can still cause hearts to flutter.

He’s sweet, funny, smart as a whip, and though he’s no spring chicken, he’s still spry as a fox.

Or at least he was until he stumbled in the garden while collecting his tools.

But Mercier, who turned 100 earlier this month, is on the mend.

Breaking his arm in the fall slowed him down a bit. He’s turned over the gardening and yard work to someone else and had to stop driving while his arm heals. He’s taken to cooking meals for himself and Dorothy, his bride of 71 years.

One of his specialties is sweet potato biscuits. “He’s taken over my kitchen now that he can’t work in the garden,” the 94-year-old mother of five said. “The kids look forward to certain things when they come.”

The kids, who range in age from 70 to 56, will all be here Saturday for their dad’s 100th birthday party. The public is invited, too.

It’s 2-4 p.m. at the Thames Center at Copiah-Lincoln Community College. While cards and notes are welcome, the family is asking that gifts not be given.

After all, Mercier said, he has so much already.

Mercier was born in Beauregard and went to school in Wesson. He finished high school in the ’30s at the Co-Lin campus. It was during The Depression and his father lost his job so they headed to Amite, Louisiana so his dad could work with the railroad.

Mercier had an uncle and aunt in Baton Rouge so he moved in with them and was able to attend Lousiana State University without paying out-of-state tuition “The was the only way I got an engineering degree,” he said. “Things were tough in the ’30s.”

He graduated in 1939 with a degree in chemical engineering and worked for Ethyl Corporation in Baton Rouge.

The third incarnation of the draft came into being in 1940 through the Selective Training and Service Act. It was the country’s first peacetime draft. Mercier joined the naval officer’s school and was called up. He was in the Navy when Pearl Harbor was bombed by the Japanese in 1941.

His unit, Lion 1, was sent to the South Pacific where their job was to service fleets with ordinances.

“The Japanese bombed us a couple of times,” he said. “We got in a fox hole. It was no big deal.”

His wife and daughter, Anne Wooson, laugh at his nonchalant answer. “No big deal to you,” Dorothy said.

When Mercier came stateside he was in Washington, D.C. He was asked to be the best man at the wedding of a man he’d served with and his friend fixed him up on a blind date.

But the other woman canceled to meet another guy so the future Mrs. Mercier took her place.

They met the first week in November and he proposed at Thanksgiving.

Mercier doesn’t have any secrets to share about reaching 100. His mother lived 99 years but didn’t quite reach centenarian status.

In fact, despite two bouts with cancer — prostate and colon — Mercier still only takes one medication, an acid reflux pill. “That way I can drink coffee,” he said.

Another trick he learned after retiring 44 years ago is to stay active. “He worked harder after he retired,” Dorothy said.

After retirement, he came back to Wesson and started a cattle business. “Now I”m a tree farmer,” he said.

He’s tried to eat good food for the past 40 years, growing his dinner in the neatly hoed rows in the garden.

Faith is important, too. The couple attend Wesson Presbyterian.

So has his wife. Mercier’s only hesitation when asked how he could stay with someone for 71 years was to stop and smile. “A little give and take,” he said.

Mercier said if he had any advice to offer young people it would be this: Work hard. Go to church. Eat right.

“And if you go to college,” he said. “Take something that will benefit you when you get out.” 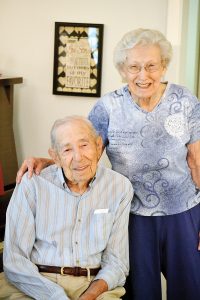 Photo by Donna Campbell/George T. Mercier and his wife Dorothy have enjoyed 71 years of marriage.

The director of the Lincoln County Public Library believes their new website is one for the books. “It’s the best... read more