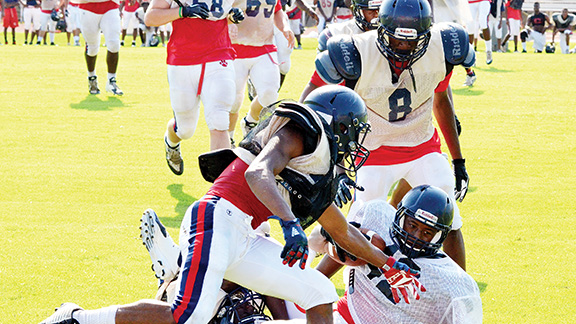 A great opportunity for high school football players throughout the area is coming to Brookhaven next week.

On May 31, Brookhaven High School will host the KDMC Mississippi-Louisiana All-American Combine starting at 9 a.m. at King Field.

The event is a joint hosting effort between King’s Daughters Medical Center and Steven Robertson of Scout.com as an effort to give football players in Southwest Mississippi a chance to prove themselves to be scouted by college football programs.

“Kids in Southwest Mississippi and all over the state can get a good chance to be scouted and recruited by some good schools,” David Culpepper, the director of marketing for KDMC, said. “Some of the kids are big time prospects and some coming in aren’t. It’ll allow them to get their name out there to prove themselves in front of good competition.”

The combine will host some of the top players from all over the state and put them through drills normally seen at football combines. Some of the drills include one-on-one competitions between position groups, the 40-yard dash, cone drills, shuttle runs, broad jumps and other drills.

The combine numbers will be posted when it’s all said and done and college football programs will get a chance to scout those athletes and see if they fit their qualifications.

“It’s a good opportunity for the kids to get their measurables out there and prove who they are as football players against great competition,” Culpepper said.

This opportunity isn’t just for the players being recruited by Division 1 schools, but it’s also for players who just want the opportunity to play college football. Many Division 2, Division 3 and juniors colleges throughout the state of Mississippi will be paying attention to what happens at Brookhaven High School next Wednesday.

“The combine can show each player the areas they need to improve in when it’s all said and done,” Culpepper said. “There are many good schools out there that aren’t the Division 1 programs that can use these kids coming out and it’s pretty good football to watch.”

From 9 a.m. until about 3 p.m., players can showcase their abilities in front of great competition and coaches will get the chance to scout possibly the next great football player that they need to win more games.

“The best part of the combine is getting to compete against players from other schools,” Brookhaven head coach Tommy Clopton said. “The colleges will find you if you have the talent to play at the next level. The combines allow kids to compete against kids and gauge where they stand.”

Right before summer workouts start, the combine will push the players to their limits in hops of achieving their dreams of playing college football.