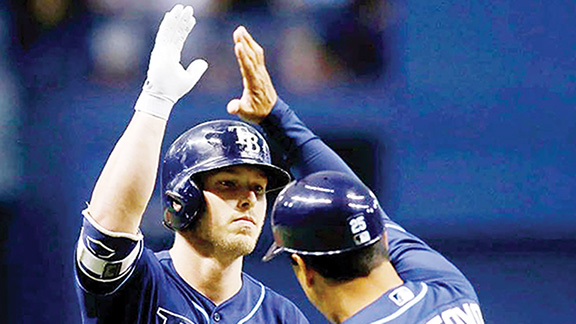 Dickerson remains hot at the plate

Brookhaven Academy alum Corey Dickerson is on a mission to transform his image.

Once regarded as a platoon/utility outfielder, Dickerson is putting up career-high numbers in every offensive category so far in the 2017 season.

With this being his fifth year in the majors, it’s only natural that Dickerson has progressed this far and has gotten better over the course of his career. But no one saw this type of season coming for the McComb native.

Dickerson is playing his best baseball as of late. Over the past seven days, Dickerson has gone 9-for-26 from the plate with six home runs and eight RBIs over that stretch.

Only being used as a platoon outfielder, the knock on Dickerson throughout his career has been his struggles against left-handed pitchers.

During his first season with the Tampa Bay Rays in 2016, Dickerson batted a .241 average against left-handed pitchers with only two home runs and 11 RBIs.

That tune has changed so far in the 2017 season as the Rays star outfielder is hitting .358 against southpaws in 53 at-bats. Dickerson has continued his trend of batting well against righties in 2017 with a .328 average, 11 home runs and 21 RBIs in 125 at-bats.

Earlier in his career with the Colorado Rockies, Dickerson had the advantage of playing in a hitter-friendly park in Coors Field, so many people didn’t think the transition to playing in an indoor park in Tamps Bay would go so smoothly.

Dickerson has proved those doubters wrong with career-high numbers in 2017.

If this pace keeps up for Dickerson, he could finish with over 40 home runs, 200 hits and 80 RBIs.

With his performance, the Brookhaven Academy alum is well deserving of a spot on the American League All-Star roster and should be in the starting lineup as an outfielder if this play keeps up.

A career-year is on the horizon for Dickerson.