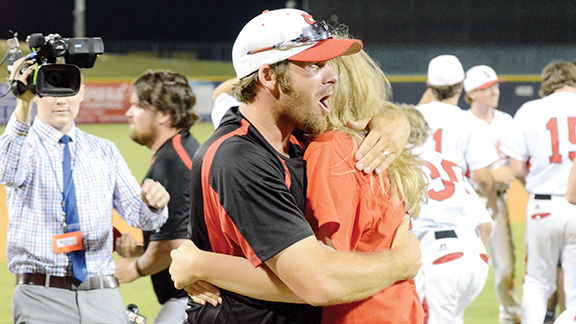 Loyd Star head coach Jared Britt celebrates after the final pitch of their 7-3 win over East Union Friday night. Loyd Star will lose four seniors before the 2018 season begins, but Britt has a stacked roster coming back. (Photo by Dylan Rubino)

What’s next for Loyd Star?

Head coach Jared Britt has a good problem on his hands entering the 2018 season as defending 2A state champions.

For the Loyd Star Hornets, the 2018 baseball team will see some major changes, but the productivity of the lineup should remain the same.

The biggest challenge facing the Hornets will be replacing senior captain Parker Flowers.

Flowers was an integral part not only in the starting lineup, but in the pitching rotation as well.

The senior finished the 2017 season batting .306 at the plate with 36 RBIs and eight home runs. As the second starting pitcher in the rotation, Flowers provided stability after junior Cade Hodges would throw. Flowers finished with a 9-1 record as a starter with a 2.90 ERA.

Flowers was the heart and soul of the Loyd Star Hornets and replacing him will be difficult because of his impact on and off the field.    Konner Allen, Bradyn Brister and Cole Smith will be hard to replace as well. Allen was a key bat in the heart of the lineup and provided a great defensive presence at third base. Brister provided power at first base and led the team with 49 RBIs on the season. Smith provided another strong bat in the middle of the lineup and delivered clutch hits on the biggest stage at Trustmark Park.

Losing those four senior leaders will definitely hurt, but this Loyd Star team could be just as good, if not better in 2018.

Cade Hodges returns and the rising senior will be looked upon to lead the team with bigger expectations sure to be put on him.

The 2A MVP had a spectacular junior year on the mound, with a 10-1 overall record as a starter with an impressive 0.88 ERA including five complete games, six shutouts, three saves and one no-hitter.

Hodges also hit .365 at the plate with 38 RBIs on the season and provided strong defense as an infielder when not starting on the mound.

Hodges and rising senior catcher Tucker Watts will surely be the two leaders for Loyd Star come next season.

Watts was the best hitter in a deep Loyd Star lineup, batting a .480 average on the season with 45 RBIs and a team-high 11 home runs. As the catcher, Watts will be looked upon to lead an experienced team in his senior year along with Hodges.

The lineup will remain stacked even after losing four seniors with Watts, Hodges and rising junior James Beard leading the way. Rising seniors Dawson Zumbro and Patrick Price will play bigger roles and will likely be everyday starters for the Hornets in 2018. Rising sophomore Harrison Brownlee, who played in 23 games for the Hornets, will also have to step up for the team in 2018. Rising junior Rilas Hester will likely replace Brister at first base.

The biggest question for Loyd Star will be how the rest of the pitching rotation shakes out behind Hodges.

Rising sophomore Tanner Watts will replace Flowers in the second spot of the rotation.

As only a freshman, Watts proved that no moment was too big for him, owning a 7-0 record as a starter and a 1.26 ERA.

Sophomore Dane Smith will likely fill the third spot in the rotation for Loyd Star.

Look for Loyd Star to be in contention for another state championship next season.

Dickerson remains hot at the plate

Brookhaven Academy alum Corey Dickerson is on a mission to transform his image. Once regarded as a platoon/utility outfielder, Dickerson... read more