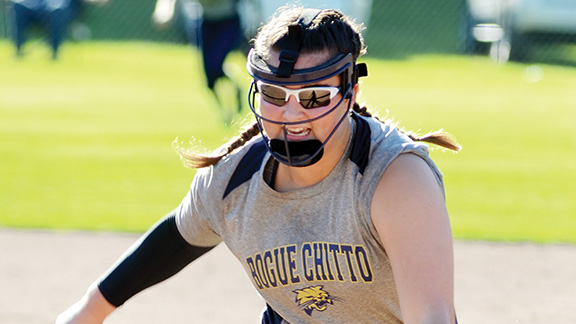 Bogue Chitto freshman Codi Leggett goes for a groundball in a playoff game played this season. For her performance at the plate and on the mound, Legget has been named The Daily Leader All-Area MVP. (Photo by Dylan Rubino)

Even after 26 games started and 166 innings pitched, freshman Codi Leggett was ready for more after winning the 1A state title for Bogue Chitto against Hamilton.

“I’m ready to keep going,” Leggett said after the title-clinching victory. “I’m not ready for this to be over.”

Her remarkable season helped lead the Bogue Chitto Lady Cats to their fourth fast pitch state championship in school history and first since 2014.

The freshman finished the season with a 21-6 overall record as a starter, including a 1.01 ERA, 25 complete games, eight shutouts, three no-hitters, 174 strikeouts and only 46 walks.

At the plate, Leggett was just as good with a .460 batting average and a team-high 40 hits, 38 RBIs and one home run.

For her stellar play on the field for Bogue Chitto, Leggett has been named the 2017 Daily Leader Fast Pitch Softball All-Area MVP.

“I’ve had the opportunity to coach 91 different girls in the past 13 years. Yes, there’s a list of top players and Codi is definitely on the list of best players I’ve coached along with several others,” Bogue Chitto head coach Scott Leggett said. “She’s a great pitcher, but she is also one of the best hitters I have ever coached.”

With not a lot of depth at the pitching position, a lot was put on the shoulders of the young freshman and she seemed to deliver in every big moment.

Leggett battled through a nagging knee injury throughout the entire season and as a diabetic, there would sometimes be problems with her blood sugar, causing her to slow down in portions of the game.

But even with all of that, Leggett powered through and was a constant threat at the plate and on the mound.

“Codi did a great job this year in the circle,” Scott Leggett said. “She had some easy and tough games. There were times when she was tired, but she stayed focused.”

That’s been the mantra for the freshman all season long, to keep on fighting and push through all obstacles in her way.

When facing those challenges, Leggett knew her pitching couldn’t single-handedly win the team games. Over the course of the season, she learned to trust her defense more and allowed them to make easy outs behind her when opposing teams made contact at the plate.

“They stayed routine and made outstanding plays for her,” Scott Leggett said. “Pitchers have a big job, but a great defense helps make you a better pitcher. She locates well and trusts her junk pitches.”

Bogue Chitto ended the season on a 13-game winning streak, resulting in another state championship for the Lady Cats and the play of Leggett had a lot to do with it.

In the South State title series against Ethel, Leggett threw two consecutive no-hitters to advance to the 1A state title series, something that impressed her head coach.

“That’s quite an accomplishment,” Scott Leggett said. “The defense played a role in that as well. In State, she did a great job against a great hitting team in Hamilton.”

Codi Leggett shined on the big stage against Hamilton. In two starts, she pitched two complete games, giving up only two earned runs (five runs unearned). At the plate, Leggett went a combined 5-for-7, including the game-winning RBI single in game one.

Codi is only a freshman and the young star has room to grow in the future. With the experience she gained in her freshman year, the sky is the limit in her sophomore year and beyond.

“This year gave her great mental experience and should play a factor for her next season,” Scott Leggett said.