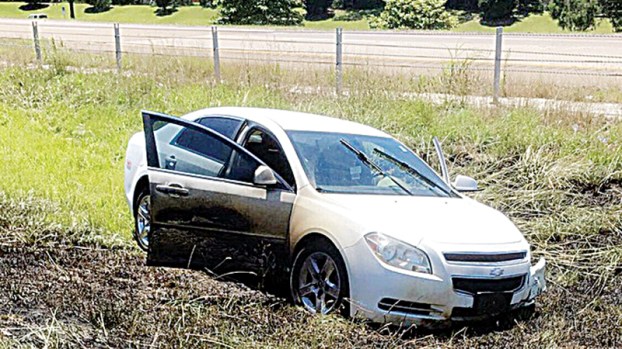 Photo by MHP/A driver from McComb was clocked Friday in this Chevrolet Malibu at 94 mph on I-55 at exit 24. He was stopped at exit 40 when Lincoln County Sheriff's deputies deployed tire deflation devices. Charges for the driver are pending.

Driver clocked at almost 100 mph on I-55 in Lincoln County, charges pending

A McComb man clocked driving nearly 100 mph on I-55 today was taken in for questioning by Mississippi Highway Patrol after fleeing authorities.

The man has not been identified at this time, and charges are pending, said Cpl. Brandon Fortenberry of the MHP.

Fortenberry said a trooper at mile marker 24 just inside Lincoln County clocked the white Chevy Malibu at 94 mph and began a pursuit about 1:30 p.m.

The driver was northbound on I-55.

MHP was assisted by deputies with the Lincoln County Sheriff’s Office, who threw out tire deflation devices at exit 40, which leads to Brookway Boulevard.

“After those deployed, the car came to a safe stop in the median,” he said.

When the car stopped, the driver and the passenger both exited the vehicle. The passenger, who is from Brookhaven but was not identified by Fortenberry, immediately got on the ground to wait for law enforcement.

He was questioned at Lincoln County Sheriff’s Office and released, Fortenberry said.

The driver fled the car on foot and was captured within minutes, Fortenberry said.

The heat from the Chevy’s engine caused the grass in the median to ignite which caused the car to catch on fire. Firefighters from Brookhaven Fire Department put out the small fire, he said.

To commemorate Memorial Day, members of the American Legion Post 12 and Veterans of Foreign Wars posts 4608 and 2618... read more