The Lincoln County sheriff’s deputy killed in the line of duty  overnight Sunday was described as a “mild-mannered officer” who loved making people smile in a 2014 story in The Daily Leader.

William Durr, 36, said he loved making children smile with puppets in an interview with a Daily Leader reporter.

Durr worked with youth groups for many years. Before he became a police officer he was a mental health technician. Durr has served as youth minister for several churches.

He did puppet shows for children’s church and other events. He had an interest in ventriloquism since he was a boy.

“When I was eight years old I had a Charlie McCarthy ventriloquist puppet,” he said in 2014. “I loved doing that and practiced with it a lot.”

“I have done a 50-year class reunion,” he said, “but, mostly I do children’s churches, elementary schools, day cares, had a part in Brookhaven Children’s Summer Camp, birthdays… things like that.”

He performed at Brookhaven Academy earlier this month.

Sheriff Steve Rushing said Durr was responding to a call in Bogue Chitto when he was killed. Seven other people were killed at three separate crime scenes. The suspect, Willie Cory Godbolt of Bogue Chitto, was captured Sunday morning.

Durr is the first Lincoln County officer killed in the line of duty, according to the Officer Down Memorial Page.

“He was a great guy,” Rushing said. “He had a heart of gold. He loved doing anything with kids. He would go out of his way to help anybody.”

Durr was being trained as a DARE officer and planned to teach the program in schools in the fall, Rushing said. The Drug Abuse Resistance Education program seeks to prevent use of controlled drugs, membership in gangs and violent behavior.

Rushing said his deputies are grieving the loss of one of their own. Counselors and area pastors are available to talk to law enforcement officers.

“The outpouring of other agencies has been awesome this morning,” he said.

He said the LCSO is there to support Durr’s family, wife Tressie and son, Nash, 11.

“I consider us all one big family. We’re here to help each other in a time of need,” he said.

Because the fatal shooting involved a Lincoln County deputy, the Mississippi Bureau of Investigations is handling the case, while LCSO will assist, he said.

He said he is sad for the families of the seven individuals who were also slain in the shooting spree.

“Our whole community is hurting right now,” he said. “It’s a hard time losing anybody, but especially this many. My heart goes out to the families of the other victims.” 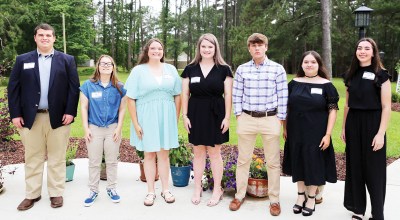