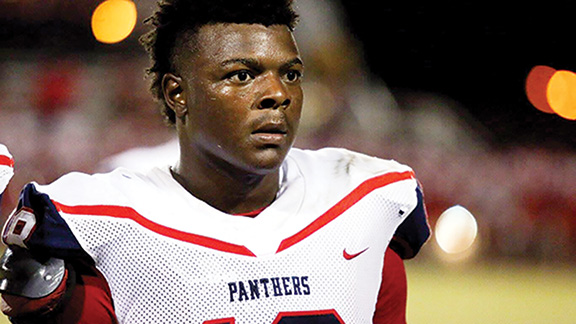 Jordan Blackwell of Brookhaven High School is focused during a timeout of a Brookhaven football game played last season. (Photo by April Clopton)

An extremely competitive person, a loving teammate and a great leader of men.

Those were the words used to describe Jordan Blackwell.

Willie Cory Godbolt of Bogue Chitto was arrested in connection to the shooting. Charges are pending.

A young life was taken too soon as the rising senior was looked up to not only as a football player and a teammate, but as a loving person who would do anything for his friends and his family, said his coach.

“Jordan was a blessing to coach and to know,” Brookhaven head football coach and athletic director Tommy Clopton said. “His smile and his charisma can not be replaced. God used Jordan to touch our lives and to teach us. He will be missed by all of Ole Brook for a long time.”

Blackwell was an incoming senior linebacker for the Panthers and was coming off a stellar 2016 season.

He totaled 86 total tackles, 64 of them solo tackles, three sacks and averaged over seven tackles per game.

Blackwell was a starter on the Ole Brook football team since he was a sophomore and meant a lot to the Panther program.

“We love that kid,” Brookhaven chemistry teacher and wife of Tommy Clopton, April Clopton said. “Our hearts are broken.”

Blackwell was well known within the Ole Brook community and was looked up to on and off the field.

Cody Barrett, a recent BHS graduate who was a manager of the Ole Brook football team, said Blackwell was an inspiration. “He was funny. He got along with everyone,” he said. “Everybody misses him.”

What surpassed his love for the game of football was his loving heart and his devotion to making people around him better at whatever they do in life, his teammates said.

“He loved his friends and his teammates. He would do anything for us,” rising senior defensive tackle Dahauntre Hill said. “He loved football. He would get on your butt if you weren’t doing your job because he hated to lose. He was a coach on the field for us.”

Entering his senior year of high school at Brookhaven, Blackwell already made an everlasting impact on his classmates, teachers, teammates and coaches at Ole Brook.

He was passionate, caring and always put others first.

“If you met him, you didn’t forget him,” rising senior Brookhaven offensive lineman Trace Clopton said. “He was a great player and a great person. He brought energy and enthusiasm to everything he did. He will be missed by Ole Brook and everyone who was blessed to meet him. My heart hurts for the Blackwell family and I’m proud to be able to call him my brother.”

Even after 26 games started and 166 innings pitched, freshman Codi Leggett was ready for more after winning the 1A... read more