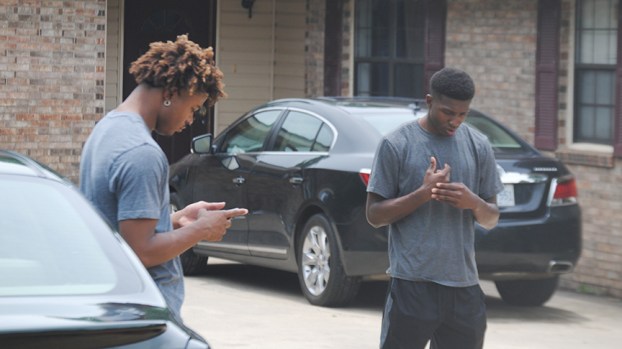 Photo by Matt Rushing/Shon Blackwell II and his friend Lazorian McNulty gathered at the house on Coopertown Road Monday where Blackwell’s brother, Jordan Blackwell, and his cousin, Austin Edwards, were killed Sunday morning.

“I know we always ask ourselves what would we do in a situation like that. What he did was heroic,” Blackwell said.

Shon and Tiffany Blackwell spoke about their son, Jordan, Monday. The 17-year-old Ole Brook linebacker was shot and killed early Sunday morning. The accused shooter, Willie Cory Godbolt, was arrested soon after. He is expected to be charged in the death of eight people including a Lincoln County Sheriff’s deputy.

Blackwell said Jordan died shielding Austin’s brother, Caleb Edwards, with his own body to protect him.

During these tragic times, love has brought the Blackwell family together.

“I hope people learn how to love,” Blackwell said. “He loved easy and he loved hard. It was easy for him to love you and he would do anything, even if something was hard to prove how much he loved you. In his dying moment, he was showing the hard side but he was also being soft and gentle at the same time.”

Blackwell has been reflecting on Godbolt’s actions.

“Love for family is one thing, help from family is one thing but sometimes we need professional help,” he said.  “All in all, we were raised to love and forgive. The Bible tell us to love each other. I hate his actions but still love him as a person.”

“He would tell you what was on his mind,” she said. “He didn’t bite his tongue. If he was thinking it, it was coming out.”

Blackwell said he’d miss his son’s spirit and his bravery.

“If he thought something was right, he was going to say it,” he said. “Sometimes people develop different personalities around different people. What I love about Jordan is that he’s the same all of the time. That’s one thing I will definitely miss about him.”

The Blackwells are both thankful for the times they had with their son. They said they are looking forward too seeing him again one day.

“Job well done,” Blackwell said when asked what he is looking forward to telling his son when he sees him again. “I don’t have to tell him how much he was loved because being that he is in Heaven, I think he will have an opportunity to look down and see what’s going on. I just want to tell him the impact he had on others because I know some kid is probably saying I want to be like Jordan.”

Father of suspect, a Brookhaven cop, shot to death in 1999

The father of the man suspected of killing eight people in a weekend shooting spree was fatally shot in 1999. Willie... read more