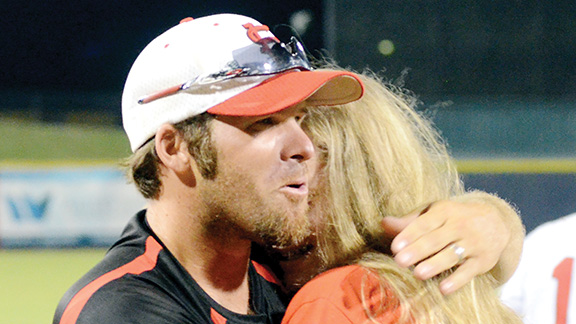 Jared Britt of Loyd Star named Coach of the Year

As an alumnus of Loyd Star High School, the Hornet community has a special place inside the heart of Loyd Star head coach Jared Britt.

Brookhaven and Loyd Star have been Britt’s home his whole life and he dreamed of bringing his alma mater a state championship, whether as a player or as a coach.

His dream was fulfilled Friday night, May 19, at Trustmark Park in Pearl, as Britt’s Hornets took down East Union to win the Hornets their first 2A state championship since 1980.

For that accomplishment and the brilliant coaching job of getting Loyd Star back to the state championship, Loyd Star head coach Jared Britt has been named The Daily Leader Coach of the Year.

“I think every little boy has dreams of winning a state championship for their school, but to be able to coach this group of boys that worked so hard to bring back the gold glove to this community means the world to me,” Britt said.

Coming into the regular season, a lot of pressure was put on the Hornets as the defending South State champions to get back to Trustmark Park. It was a burden for Britt when coaching his team, but something that also fueled him.

“Knowing the high expectations the community had for us after playing in the state championship series last year was a lot,” Britt said. “Worrying that we might not make it back again this year was also a lot.”

Even with all of the expectations, the Hornets were an unstoppable force during the regular season, starting off 29-0, including an undefeated 27-0 regular season. Their first loss of the season came during the second round of the 2A state playoffs against Lake, where they were shut out in game one and lost 2-0.

That loss lit a fire underneath the team as they bounced back to win game two, crushing Lake by a score of 18-5 and forced a decisive game three. That bounce-back performance in game two stuck with Britt as a turning point in the season.

“The boys came out and hammered them after that,” Britt said. “Winning that game 18-5, I felt like that set the tone for us for the rest of the playoffs.”

After a thrilling game three victory against St. Joseph Catholic to win the South State title, the Hornets had to wait a day to find out who their opponent would be at Trustmark Park.

It was East Union.

A second chance was given to Britt and his team, as they all knew this was a chance they couldn’t let slip away.

“It’s always good to get a second chance at things you feel like you could’ve done better at,” Britt said. “I told the guys in the state championship series that most people don’t get second chances to do things and that we needed to take advantage of our second chance. It felt great being able to beat the team that beat us last year.”

It was a clean sweep in the 2A title series. This time, the Hornets made the most of their moment.

Britt made a point to his team to finish the job and not to be satisfied with just making it to Trustmark Park. The team came in focused and on a mission to bring the Gold Glove home.

Britt has known the four seniors on the team for most of their lives and it brought him great joy to send them off into their futures as state champions.

The greatest joy Britt got had nothing to do with hardware, but seeing the passion and brotherhood his players and coaches had for one another.

“They always have each other’s backs and kept not only themselves entertained and loose, but they did that for me also,” Britt said. “It was just a great group of guys to be around. I can’t say enough about how much fun it has been to call them my boys.”

An extremely competitive person, a loving teammate and a great leader of men. Those were the words used to describe... read more