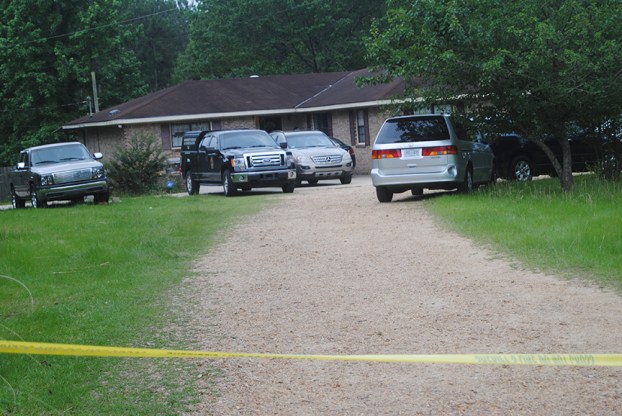 Photo by Matt Rushing/This house on Coopertown Road in Bogue Chitto was the scene of a fatal shooting overnight. A suspect, Willie Cory Godbolt, of Bogue Chitto, has been arrested. Charges are pending. Daily Leader photo

The teenager kidnapped by accused killer Willie Cory Godbolt Sunday morning kept the man talking for four hours before he was released, his grandmother said.

Lipsey Middle School Principal Rita Robinson said it may have saved his life.

Xavier Lilly, 16, hasn’t talked much about the ordeal or what he knows about the shootings that took the lives of eight people including a Lincoln County deputy.

“He’s OK,” Robinson said. “He’s being kind of quiet and really doesn’t want to talk about it.”

She said Lilly, a junior at Brookhaven High School, was visiting with friends at 1658 Coopertown Road in Brookhaven Saturday night. The youngsters had been at a picnic earlier that day.

Godbolt arrived shortly after that at Coopertown Road, where Lilly and his friends were staying. That’s where Godbolt is accused of killing two juveniles, Strain said.

The two have been identified by school officials as students in the Brookhaven School District. Austin Edwards was a sixth-grader at Lipsey Middle School. His cousin, Jordan Blackwell, was a senior at Brookhaven High School and a linebacker on the Ole Brook football team.

Austin’s and Xavier’s mothers are best friends, she said.

Robinson said it appears Godbolt broke into the home and demanded car keys.

“The children didn’t let him in,” she said. “He burst the door in. He kicked the door in.”

She said Xavier was trying to tell Austin to be quiet. “He said he knew Austin had gotten shot. He saw that, he said. He didn’t realize that Jordan had gotten killed. He said he thought it was another kid behind him,” she said.

She said Xavier tried to distract Godbolt so no one else would get shot.

That’s when Godbolt took her grandson, she said.

Xavier told his grandmother that he remembered seeing in a movie that if someone is holding you hostage, you should keep them talking. “He talked and talked and talked for four hours while they drove around,” she said.

She said she prayed for her grandson when she learned he’d been kidnapped.

“My specific prayer was to allow Xavier to be able to witness to this guy and change his heart,” she said.

Xavier told her that he didn’t know where they were driving to, but when they got to Hwy. 84 and East Lincoln Road, Godbolt told him to stop.

Godbolt is accused of killing Ferral and Sheila Burage at their home at 312 East Lincoln Road a short time later, Strain said.

He was arrested near the scene not long after that.

Godbolt will likely be charged with one count of capital murder and seven counts of first degree murder, he said.

If found guilty Godbolt could face the death penalty or life without parole for the capital murder charge. First degree murder can carry a penalty of life in prison with the eligibility of parole.

Services for slain Lincoln County Sheriff’s deputy and others scheduled